While Rebel News is crowing about having registered a U.N. Human Rights Complaint "against Justin Trudeau," it's worth pointing out how that complaint is absolute garbage, despite having been drafted by self-professed civil rights attorney Sarah Miller, and I will give you a single example as to its utter worthlessness and dishonesty.

On page 10 of that complaint, one reads the following total shash from Miller regarding the invocation of Canada's Emergencies Act: [emphasis added]

Exercising fundamental freedoms and failing to comply with the powers exercised under the Emergencies Act, attracted up to five years imprisonment. Due to the overwhelming public criticism, an inquiry has been launched into the decision to invoke such powers.

Miller is clearly claiming that an inquiry into that invocation is being driven by public outrage.

That is a bald-faced lie.

As anyone can read here, any such invocation requires a subsequent inquiry by law: [again, emphasis added]

An  inquiry held: After the emergency has ended, the Emergencies Act requires the Government to hold an  inquiry, and table a report to each House of Parliament within three hundred and sixty days after expiration or revocation of the declaration of emergency.

Miller's claim that the inquiry is the result of public pressure is utter nonsense and, as a lawyer, one would think she is capable of reading and understanding simple English.

BONUS TRACK: While waiting for coffee, let's ponder one more example of the utter dishonesty of barrister Miller's idiotic U.N complaint. Recall how both Rebel News' Sheila Gunn Reid and Miller continuously, constantly and relentlessly describe the complaint as "against Justin Trudeau," as if the Prime Minister is capable of unilaterally and single-handedly stripping Canadians of their Charter rights.

First, this suggestion is imbecilic given that almost all of the examples in Miller's horked-up hairball of a complaint are (as I have pointed out before) provincial offenses and have nothing to do with Trudeau. The only theoretical issue that could be laid at Trudeau's feet is the invocation of Canada's Emergencies Act, which Miller clearly suggests is personally Trudeau's fault.

This suggestion is indescribably stupid, as one can read from that earlier link once one appreciates the work it takes to invoke that Act: 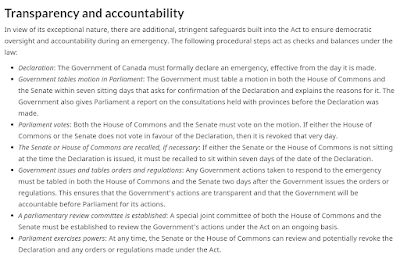 Take, if you will, the time to truly understand the draconian requirements to invoke that act, which requires (among other things) a Parliamentary majority vote. By suggesting that Trudeau is capable of doing all of the above by his lonesome suggests that Miller is either:

Take your pick. There is no door number three. There just isn't.

If Miller is really this awful a lawyer, I'm starting to understand why her clients spend so much time in jail.

I've seen Miller's Linkedin profile, where she goes on at length about her expertise in various areas, which is why it's so puzzling that she's such a horrible lawyer. It's not just this latest U.N. complaint -- she's represented "Pastor Art" for the last two years, and can't seem to keep him out of jail. He gets bail, he violates his bail conditions, gets arrested again, and so on and so on. How is it that Miller can't advise her client on the simple conditions for staying out of custody?

(Same anonymous as above): One of the stupidest things Miller suggests is that Trudeau somehow violated peoples' rights by invoking the Emergencies Act. But Trudeau kept *refusing* to do that, insisting that local law enforcement had all the tools they needed to deal with the siege of Ottawa. And Trudeau was right, they *did* have all the laws they needed, they simply chose not to enforce them. It was only after it became obvious that local cops were *supporting* the occupation that the federal government stepped in.

A guy like Pawlowski is one of the worst clients that a lawyer can have. Like Alex Jones, you can advise them what to say and do until you’re blue in the face, but because the client thinks that they’re “in the right” (and likely as not, they also think they are smarter than everybody else in the room), they still go off and do what the hell they please.

Having Pawlowski as a client doesn’t make Miller a bad lawyer - writing utter drivel that grossly misrepresents the law, and how it operates makes her a bad lawyer who has worse clients.

MgS: You're half right.

You're correct in that having a client like Pastor Art who keeps breaking the law and getting re-arrested doesn't make Miller a shitty lawyer. However, if Pastor Art's regular re-incarceration is exclusively his fault, it's incredibly inappropriate to keep blaming the legal system for it.

No one is suggesting that Miller publicly chastise her client for being such a dick. On the other hand, it's ridiculously sleazy for Miller to perpetually suggest that this is all the fault of a pernicious legal system that is unfairly persecuting a devout Christian who only wants to feed homeless people. Which is exactly what she's been doing.

Even if you can't control your client, it's wildly inappropriate to suggest it's the fault of the legal system.

This is correct. The Alberta Law Society's Code of Conduct states that "a lawyer must encourage public respect for and try to improve the administration of justice." In criticizing courts, lawyers are to avoid criticism that is petty, intemperate or unsupported by bona fide belief in its real merit. When involved in proceedings, a lawyer's criticism risks being seen as partisan rather than objective. Finally, lawyers have a duty to support the courts because decision-makers can't defend themselves. Miller does nothing to encourage public respect for the administration of justice. Indeed, by prematurely taking her complaints to the UN, she's discouraging respect for Canada's legal system and violating the law society's code of conduct.