Why is Keith Wilson, Q.C., such a total asshat?

Apparently, some yammering colostomy bag named Keith Wilson (Q.C., apparently) is having trouble representing accurately the vaunted "breakthrough" between the city of Ottawa and a bunch of fascist, neo-Nazi, Confederate flag-waving white nationalists back in February. Luckily, a Twitterer named "rictus bix" is there to take Wilson to school: 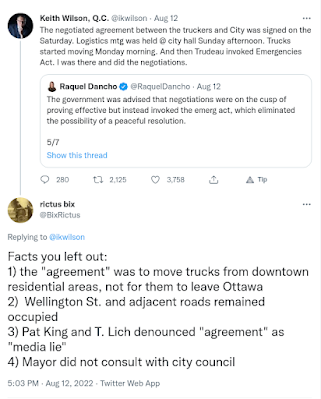 Now if Wilson could shut the hell up and let the grown-ups take it from here, that'd be great, thanks.

Here is a lovely picture of Keith with Tamara of the Freedum™ Konvoy...