Holy shit, this is some Adrienne Batra-level stupid.

She actually said this: 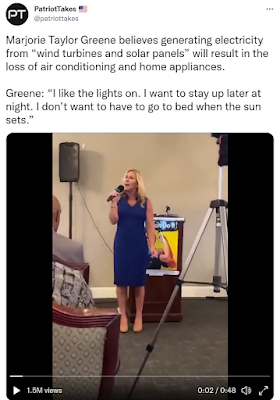 Go listen for yourself.

Go listen for yourself.

No thanks. I value what's left of my sanity, and would prefer not putting that in danger. It's bad enough attempting to read even one (run-on) sentence of a transcription of anything Donald Trump says. Seriously, I've literally gotten headaches trying to do so in the past, because my mind expects something resembling actual sentences - like when I'm reading books or whatever - and instead finds word jambalaya.

“A North Carolina town council approved a sweeping moratorium on solar power development after residents expressed fears that solar panels cause cancer and drain the sun’s energy, which would leave their town dark and devoid of plant life."
Town Rejects Solar Panels Because They ‘Suck Up All The Sun’s Energy’

I need a link for that because, even as abysmally stupid as North Carolinians are in general, that is beyond comprehension.

I'm not the anonymous poster who referenced the story, but from what I can tell, this is the original from 2015:

A story from Global linking to the original one, showing it made a bit of news here:

No solar farm for this town: Residents concerned it would ‘suck up all the energy from the sun’

...and even a Snopes link commenting on its veracity:

Is MTG the fruitcake who wants to liberate Canada, whether Canadians like it or not?

I expect she'll be Trump's Chief Science advisor in 2024.

But I've never been called an optimist.