What's the point in asking if they won't answer you, anyway?

As part of an existing update over at my fundraiser to take on Ezra Levant in court, I thought this short snippet would be enlightening. In his Statement of Claim of June 2016, Ezra explicitly called me out for not having contacted him directly to clarify the claims I had been making. 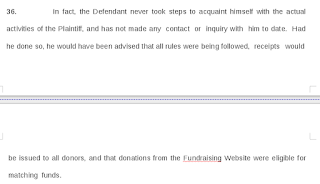 Now, this complaint is more than a little hypocritical since Ezra had already blocked me on Twitter, so it's not clear how one can explicitly refuse to see communications from someone else on social media, then proceed to complain about how those people subsequently don't communicate with you on social media but that's neither here nor there.

What is interesting is that others did in fact try to get information out of either Ezra or other Rebel Media staffers and, for their trouble, they were ignored, or simply mocked and ridiculed while being told nothing.

I present to you the case of one "Camron" who, as you can see, over the course of two days, simply wants to know if Indiegogo waived their standard 5% processing fee for Ezra's boutique fundraiser. 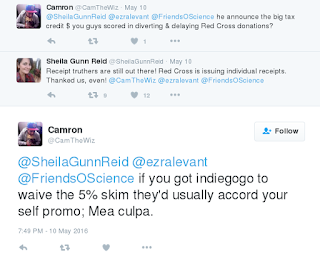 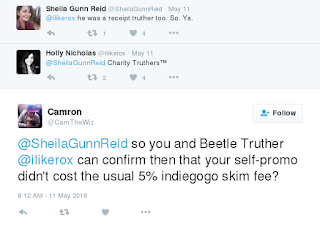 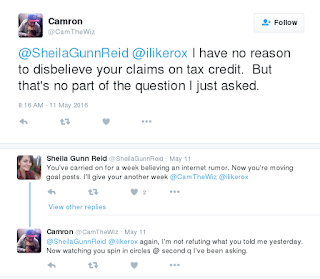 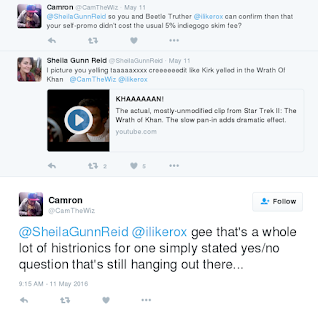 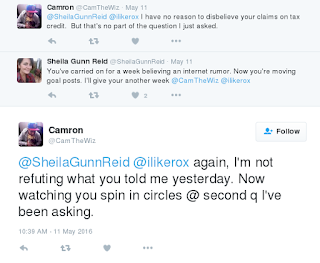 As you can clearly see, despite Camron's relentless quest to get a simple answer to a simple question, staffers at Rebel Media simply ridicule him, without telling him what he wanted to know.

Under the circumstances, it seems more than a little hypocritical for Ezra to criticize me for not trying to get clarification from him, when others tried exactly that, and they were sent packing.

UPPITY DATE: It's worth adding a couple extra examples of Ezra Levant's hypocrisy, wherein he insists he would have been happy to explain all of the inconsistencies and implausibilities related to his fundraiser, if only I had taken the time to ask.

As I have already demonstrated, others did go the trouble to ask, and were invariably mocked, insulted and/or ignored by various staffers at Rebel Media. Here's another example of someone asking a very precise and specific question about the fundraiser's claim to be able to fully and completely match all donations: 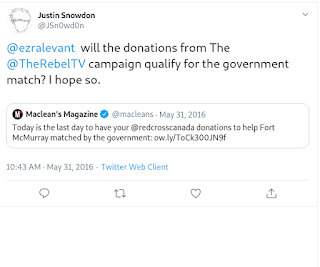 As anyone familiar with Twitter can tell from the above, "Justin" is asking a very specific question about the matching, and you can clearly see that, despite tagging both Ezra Levant and Rebel TV, he never gets a reply, even to this day.

As one more example, the very next day, we have exactly the same thing: 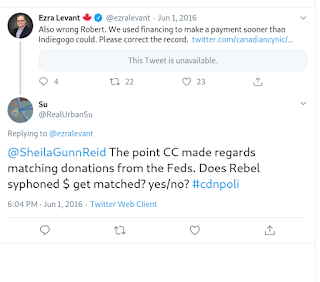 Again, despite "Real Urban Su" replying directly to Ezra and additionally tagging Rebel's Sheila Gunn Reid, there is no reply. And yet, despite this, Ezra's position is that I needed only to ask to have everything explained to me.

UPPITIER DATE: It's worth reproducing a further tweet from Twitterer "RealUrbanSu":

wherein Su finally lays to rest the claim that all one had to do was ask Ezra Levant or Rebel Media for clarification and they would have provided it.