That would be Rebel reporter and junior high school student William Diaz-Berthiaume, who zipped into town just long enough to tell TUPOC's side of the story, accuse TUPOC's critics of being Antifa, then fuck off so he never has to deal with the consequences of a Convoy-related and openly militaristic group of white supremacists setting up a base of operations just down the street from Parliament.

Same as it ever was.

ASTONISHINGLY, Diax-Berthiaume's entire article (archived at The Wayback Machine here so you don't need to give Der Rebel any clicks) is depressingly ignorant and incomplete, considering he's actually based in Ottawa and should know better. So if you want to wade through that fascist swill of a news piece, keep in mind that Diax-Berthiaume lives here and has no excuse for being that pig ignorant of what's been going on.

HYSTERICAL: Luxuriate in the rancid dishonesty of this tweet: 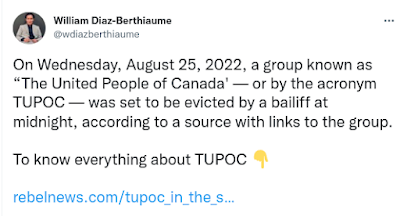 Rebel News saying that being anti-fascist is something bad...
Oy Vey....

Well at least they know their audience.