The United People of Canada, a "Freedom Convoy" spinoff that promoted and actively participated in the three-week disruptive and financially devastating siege of Ottawa back in February, currently demanding that Ottawa police step in and protect them from (*checks notes*) harassment.
BONUS TRACK: Where TUPOC and its director William Komer once had two GIveSendGo fundraisers active, there is now just the one: 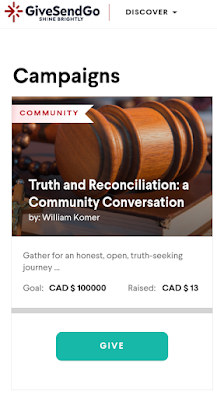 and if you follow that link, well, it's dead, Jim. So 'twould appear that Komer is shutting things down and collecting what little cash he can get his hands on while backing slowly toward the exit.
BY THE WAY, as Komer insisted that TUPOC was a registered "non-profit", are there not documents that we, the public, are entitled to see?
Posted by CC at 8:36 AM

There's a difference between a "not for profit" corporation (which they seem to be, registered with Corporations Canada) and a Charitable Organization, which they are not. Disclosure requirements for the latter are much higher than for the former.

But that all begs the question.

They claim to be a "fraternal organization" (which, like a service club, requires both membership and a governance body.
Their governance seems to consist of three "directors" who, under law, are responsible for the management of the assets of the corporation on behalf of the membership to achieve the objects of the corporation.
In every fraternal organization of which I've ever been a member (and, for that matter, in every not-for-profit I've been involved with) the Directors are elected by, directed by, and accountable to the membership. If TUPOC's refusal to answer direct questions about their governance, it would seem that the current slate of three directors simply appointed themselves. So if that's the case - three individuals declare themselves a "not-for-profit" and immediately receive the tax and other benefits associated with NFT status, without accountability to any one...well, that's pretty weird.