Chronicles of Twatrick: And the collections keep on coming ...

I was just informed that, pursuant to my collection proceedings against Lloydminster's favourite undischarged bankrupt and village idiot Patrick Ross, the Saskatchewan Sheriffs are turning over to my crack, elite and crack legal team several hundred dollars, representing an amount apparently seized sometime between February and August of last year; the time lag is because any collections made pursuant to SK's "Enforcement of Money Judgments Act" (EMJA) are required to be held for a period to give the seizee (in this case, Lord Baron Twatrick von Loadenhosen) the chance to object to the seizure, but since Patrick has absolutely zero grounds to fight these collections, it is all eventually turned over to me thusly:

If I read the above correctly, it means that while a grand total of $947.31 was wrenched forcibly from Patrick's sweaty hands, a full $187.75 of that was redirected to the government to reimburse them for their time and efforts in effecting the collection; this means that while Patrick was divested of almost a thousand dollars, he gets credit for only the amount that gets to me: $759.56. And this happens every single time; whenever a collection is made, Patrick loses close to two hundred dollars as the collection fee, and his debt to me is reduced only by the remainder. Simply put, every time I ask the sheriffs to go after his bank account again, it costs Patrick a couple hundred dollars he will never see again on top of whatever else the sheriffs get their hands on.

Oh, and it would appear from the above that, after all that, during that same time period, Patrick's debt to me increased by a whopping $2,871.15. In other words, even as I take Patrick's money, what he owes me grows even faster than what I collect.

If one accepts the evidence, one can safely conclude that Patrick is not getting out of bankruptcy any time soon.

UPPITY DATE: Pursuant to a couple emails I got asking how garnishment proceedings are going against Patrick, they're not as, apparently, garnishment does not work across provincial boundaries so, for the time being, I am content to just ask the sheriffs to occasionally seize what is in Patrick's credit union account.

The awkward consequence for Patrick is that, in order to avoid garnishment enforcement, he is of course required to work out of province, effectively preventing him from returning to any job in Saskatchewan. So, yes, this is the life Patrick has chosen for himself. And to think of the numerous opportunities he had over the years to get out of this inexpensively and get his life back.

The road not taken, I guess.

It is now 17 months since a Saskatchewan judge allowed me to register my 2010 judgment for malicious defamation against Lloydminster's Patrick "Nexus Alpha Male Triple Threat Dragon Fire Super Mullet MMA Cosplay" Ross, whereupon he was informed by the court that he owed me over $100,000, and that that amount was increasing at a punishing five per cent annually:

To no one's surprise, in that 17 months, Patrick has handed over no money and has refused to engage in anything regarding negotiation or settlement talks, so you're welcome to do the math as to how much he owes me as the weeks and months go by.
I have plans for Patrick for 2023; more than that, I will keep to myself.
P.S. In case anyone is keeping up with the ongoing adventures of Lord Baron Twatrick von Loadenhosen and notices he's relocated back to Saskatchewan, I would appreciate a heads-up on that.
Posted by CC at 2:13 AM 2 comments:

Chronicles of Twatrick: OK, then.

Chronicles of Twatrick: Ah, the irony.

Man who owes me well over $100,000 pursuant to defaming me maliciously over a decade ago will now take issue with others who allegedly misrepresent stuff.

Chronicles of Twatrick: 2023 coming down hard.

Hard to believe it's been almost a year and a half since a Saskatchewan judge allowed the registration in that province of my 2010 malicious defamation judgment against Lloydminster's Patrick "Super Duper Alpha Male" Ross, laying out just what he owes me and how rapidly that amount is increasing:

As regular followers of this sorry saga surely know, Patrick has made it clear that he has no intention of ever paying off what he owes me, and has even stated quite publicly that he does not consider my judgment valid (despite what courts in Ontario, Saskatchewan and Alberta have found). But what exactly is in store for Patrick in 2023? I'm glad you asked.

As it stands, I have at least three avenues via which I can legally drag Patrick in for questioning regarding his finances and assets and, after pondering, I'm thinking that I might use the powers granted me by Canada's Bankruptcy and Insolvency Act, particularly those found in Section 163, so let's take a quick look at what's there.

However, note well that that paragraph describes the power of the trustee to examine the bankrupt, and since Patrick has not had a trustee since February of 2014 (said trustee having discharged himself due to Patrick's ongoing refusal to honour his obligations under the bankruptcy regime), that paragraph doesn't really apply here. But scroll down just a wee bit and ... JACKPOT!

Yup, that's what we're after, as that paragraph goes into gruesome detail as to how the undischarged and uncooperative bankrupt can have his sorry ass hauled in for questioning by a creditor, and that would be me. And the best parts of the above?

First, note well that all that examination would be under oath, so if Patrick lies (as he is wont to do), well, that's perjury. But that's not even the best part.

Note also that my questioning is not limited to just Patrick. No, the BIA gives me -- the sole creditor -- the power to question "any other person named in the order," which almost certainly would include anyone who might have had financial dealings with Patrick over the last several years, including his father and siblings (and possibly even others), so Patrick and all the rest of those reprobates might start preparing for the eventual court order requiring them to turn over years worth of bank statements and credit card statements and tax returns and so on and so on, because I am absolutely going to name that entire collection of idiots in the eventual court order.

Finally, no one need take my word for any of this -- read that section of the BIA for yourself and tell me it doesn't say what I claim it does. Long story short, sometime in this new year, Patrick will be on the receiving end of a court order, requiring him to turn over to me a truckload of financial statements, then ordering him to sit for a BIA-mandated examination under oath. And I won't be leaving his family members out of the fun, either.

ADDENDUM: In the comments section, "PLG" asks the burning question for 2023:

The big question for me is, what are the consequences when Patrick doesn't show up to this (or furnish any of the ordered stuff)? 'Cause you know he won't, so there better be some for the whole thing to be worthwhile.

I will refrain from editorializing and refer interested spectators to the BIA, in particular the following sections. First, here's parts of Section 164:

As one can read, failure to produce has consequences for either Patrick or anyone else named in the order.

More significantly, a failure to attend an ordered examination will have consequences for both Patrick and, again, anyone else ordered to attend for questioning:

The tail end of that section can be summarized as "a warrant may be issued for their arrest."

I plan on doing this entirely by the book; I will file the appropriate action(s), and let the power inherent in the BIA take it from there. And if that culminates in arrest warrants being issued for one or more people, so be it.

P.S. Note well that Patrick has very little room to fuck around and waste time, as the BIA makes it absolutely clear that, once ordered to produce documents, Patrick and anyone else has only five days to hand them over. So when things start to happen, they will happen quickly.

MORE ADDENDUM: Lest anyone think I am embellishing any of this, I will once again simply point you to the BIA, and this section explaining under what circumstances the court is more than willing to issue an arrest warrant for a bankrupt: 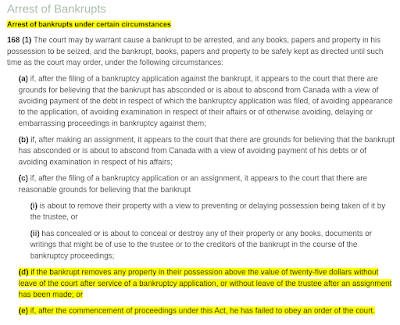 In short, if Patrick, any time after he declared bankruptcy in December of 2012, transferred out of his possession without permission so much as $25 worth of property, well, that might have consequences.

Yeah, it's a couple days early but I'm loading a suitcase and heading out of town shortly and I didn't want to deprive my loyal readers of their monthly giggle. As of Monday, December 19, it will be 16 months exactly since Patrick "Kid Cash Thunderbolt Assholery Nexus Bikini Designer Fugitive Tory Quintuple Threat MMA Cosplay Failed Bankrupt" Ross was told by a Saskatchewan court that he owed me over $100,000 due to his refusal to honour his obligations under Canada's federal bankruptcy laws:

an amount that (as you can see) is growing by five per cent per year. And while I have managed to forcibly seize a few thousand dollars from him over the last year or so, it's reasonably safe to say that Patrick's debt to me is increasing inexorably by over $500 per month, despite his insistence that as long as he ignores the situation and pretends it's not happening, he won't have to pay me anything.
It doesn't work that way.
In any event, y'all have a fun holiday; I'll be online throughout and working to some extent, but it's time for a little R&R while I allow the Twatrick debt clock to keep chugging along. Patrick can continue to dodge and weave from his legal obligations to the Saskatchewan sheriffs and the federal Office of the Superintendent of Bankruptcy, but there will, someday, be a reckoning. And it will not be pretty.
Posted by CC at 2:22 PM 19 comments:

Suspended temporarily from Twitter ... and you won''t believe why. 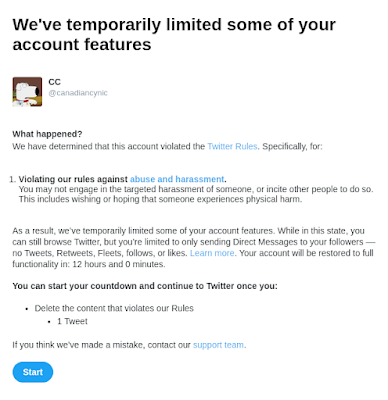 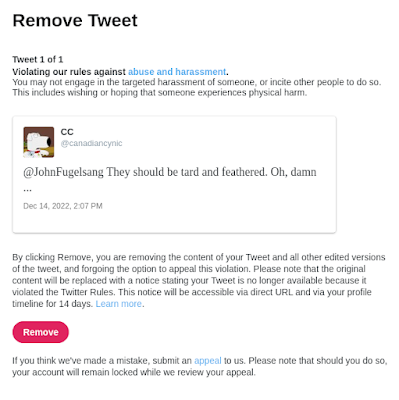 Feel free to let Twitter know that I'll be unusually quiet for the next 11 hours and 46 minutes because of sarcasm. Or satire. Or whatever.
P.S. Let @JohnFugelsang on Twitter know that this is all *his* fault. Or something.
Posted by CC at 4:35 AM 3 comments: