According to this, The United People of Canada have somehow convinced a Justice of the Peace to approve criminal prosecution against two unnamed individuals: 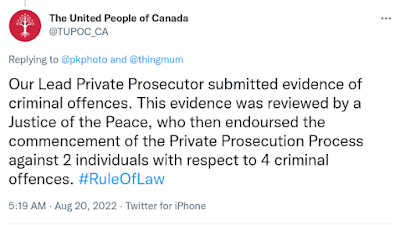 Let's watch.
HMMMMMM ... One wonders if TUPOC's William Komer is accusing someone of criminal trespass. This would be interesting since, as I have explained on occasion, only the owner of a property or a person in control of that property can level such an accusation, which means that the instant TUPOC was officially evicted from St. Brigid's, they lost any ability to accuse anyone of trespassing. (Ironically, it appears that TUPOC are the ones currently trespassing, but that's just a side note).
HANG ON: Is TUPOC suggesting they've filed criminal charges against the owners of St. Brigid's? This could get exciting in a hurry. 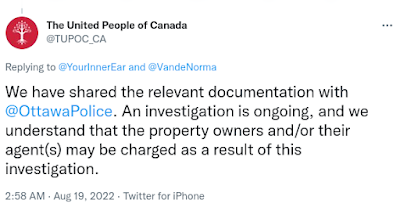 STILL CONFUSED: Not sure how to parse this ... TUPOC's tweet is clearly designed to give the impression that a JP reviewed TUPOC's claims and "endoursed" them; as in, that the JP in some way approved them for actual prosecution. But Andrew suggests that all that means is that a JP has agreed to examine them (which I am assuming is legally required for all such claims, even the most absurd). 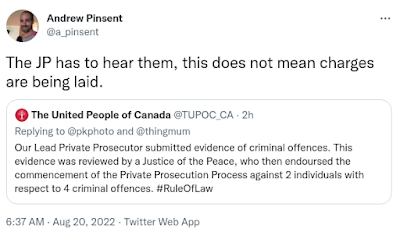 Can someone clarify? And how low a bar is it for such claims to be approved by a JP and passed on for prosecution? And even if the JP passes it on, is it open to the Crown to simply refuse to prosecute? So many questions ...
Posted by CC at 5:31 AM

Having a JP "endourse" [sic] a private prosecution is not as impressive as it sounds, as the JP has only the claims of the applicant to work with, and if TUPOC embellished or exaggerated or straight-up lied about what happened in order to convince a JP to sign off, then when that case gets in front of a judge and it becomes obvious they lied, they are in big trouble. So this all hinges on what they filed and whether it's accurate.

One has to give people on the right for trying to organize to get what they want. Of course, the mental faiure that makes them want the stupid stuff that they want also ensures that their organizing is often incompetent.

The fans of Hillary Clinton believed the election was stolen by Trump through the collusion of a foreign power, the nefarious Vladmir Putin. But those Clintonites simply sat through a three year investigation that concluded (in their deluded minds) that Trump was guilty as sin but ("Sigh!" "Alas!") one cannot indict a sitting president.

Which is insane since the point is that he was fraudulently installed.

But anyway, that was the conclusion and the Clinton fans did nothing.

But when Trump's fan believed the Democrats stole the election they went to the capital to try to stop the (they believed corrupted) Electoral College count.

Here in Canada, these numbskulls are reporting Trudeau to the UN for the crime of being PM while the provinces were imposing anti-COVID regulations and trying to crowd-fund on the fly to establish a base of organization for further hostilities.

Based on the overview for “Private Prosecutions” from the Ontario Courts, I’d say they got as far as correctly filling out the paperwork so the JP would look at it. The next step involves showing the JP and the Crown that you have enough evidence to back up your allegations … and then the Crown gets to decide if it’s worth proceeding or not …

My guess is none of these get past the Pre-Enquete Hearing stage, and the “accused” will never even hear that they were charged unless goober-in-chief Komer says something on Twitter. (Which would be stupid for other reasons)

Having people lay private prosecutions is bad public policy. Typically, the Crown quickly takes over then tips the whole thing into the round file marked Garbage.

So you know, there's no such thing as "criminal trespass" in Canada. The only reference in the Criminal Code is s.177: "Every person who, without lawful excuse, loiters or prowls at night on the property of another person near a dwelling-house situated on that property is guilty of an offence punishable on summary conviction." [bolding mine]

The impression I have from looking at the documents from the Ontario Courts is that these "private prosecutions" are basically a tool for the (relatively rare?) cases where the police refuse to lay charges for some reason, and the wronged party thinks they have enough of a case to force the matter. Ultimately, the Crown Prosecutor (I think) still gets a say in whether or not there's enough merit to move the case forward.

I imagine that, as you said, the vast majority of such cases disappear into the circular file.

Bringing a private prosecution is riskier than simply suing someone. First, the standard of proof is much higher -beyond reasonable doubt vs. balance of probability. Second, without legal training it's hard to meet the prosecutor's duty of fairness. Finally, in the likely event that you fail,
you risk being sued for malicious prosecution. Charging the landlord and bailiff as these guys seem to be doing is just nuts.

The people they are trying to charge won't even hear about the charges unless the application gets through a good half dozen gates - any of which could stop the process dead in its tracks. All they've done so far is file the paperwork with the courts - apparently well enough filled out to meet the standard of "it looks like they filled out the right boxes".

If they've been dumb enough to yammer in public about who they're trying to lay charges against, then that could turn into something quite nasty for TUPoC.