Oh, dear ... someone just brought this tidbit to my attention:

From only what I have read online, let me speculate on both what is happening, and what is going to happen.

Apparently, undischarged bankrupt and basement-dwelling debtor currently having his wages garnished Patrick Ross is moving to "strike" part or all of Peter Skinner's Statement of Defense related to Patrick's ludicrous million-dollar defamation lawsuit. And here's how I see this going (based on my "I am not a lawyer" disclaimer).

The notion of striking a pleading is based on the argument that there is something in your opponent's pleading that is so outrageous, so ridiculous, so unsupportable that you want the court to remove it before the matter even goes to trial. That is (as I read it), you want certain arguments expunged from someone's pleading so that a trial judge never even sees it.

This is not a motion to be filed lightly, as discussed in this piece explaining what it takes to get a court to strike: 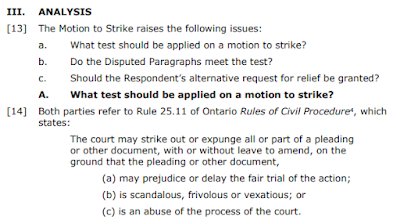 Note well the seriousness of what is required to strike; grounds for striking most definitely don't include alleged irrelevance, or your being upset about what someone claims, and so on. Again, to ask a court to strike someone's pleading is to suggest that what is submitted is so off the wall for some reason that a trial judge should not even be allowed to see it.

So I'm guessing that what is happening here is that boy lawyer Patrick Ross, once again digging into his "Civil Litigation for Asshats" colouring book, has latched onto this, then has (as always) mis-interpreted it beyond recognition and has written another hilariously meaningless and incoherent motion that will both stun and entertain the Court.

The above is, of course, all speculation, but given Patrick's decade of history of writing and presenting his own actions, and having them absolutely disemboweled by the Court, I shall predict that this is going to end up the same way.

PREDICTION: I was asked to predict how this Aug 30 hearing will turn out. I predict that it isn't going to happen, as Patrick will find some excuse to postpone it because he's well aware of the stomping he would get. Let's watch.

So Patrick is actually asking the court to strike Peter's defense of justification? I can tell you that's not going to happen.

In any defamation action, a defendant is normally going to argue a defense of justification; that what he said was substantially true. Lots of these defenses are ridiculous but that's normal, a judge expects that, and at trial, the plaintiff will simply discredit that argument with facts. So it's totally normal for a defendant to show up at trial with a worthless defense of justification. It's all part of the process.

But for a plaintiff to file to strike the defendant's defense of justification is saying that you don't want the trial judge to even HEAR the defense, and that's a really serious thing to try to do. Even if that justification argument is really stupid, the judge will still want to hear it, and the plaintiff is more than welcome to refute it at trial. But I just can't see any motions judge agreeing that that argument doesn't even deserve to be presented at trial.

If this is what Patrick is trying to do, he's in big trouble.

It's always fun to see Twatsy try so hard to use fancy-sounding legal language ... "statements uttered as if factual." Does he think judges are impressed by this?

If Patrick loses this motion, will he have to pay costs?

Anon @8:56 AM: I would assume so, although whether he every pays them is a different question. If history is any guide, he won't.

This whole thing about Twatrick trying to remove segments of Skinner's statement of defense is hilarious given (1) the threshold required for actually doing so, and (2) because he's been hiding the fact that he's an undisclosed bankrupt without a trustee and has no standing to sue anyone in the first place. This has disaster written all over it....now if you'll excuse me, I'll go make the popcorn.

Since he's an undischarged bankrupt without a trustee and has no legal standing to sue anyone, can the courts fine him for wasting their time?

Anon @ 9:24 AM: People bring meritless motions all the time, and it doesn't mean they'll be smacked by the court financially, but this case is different.

Patrick's biggest worry is that he (reportedly) received a letter from Canada's Office of the Superintendent of Bankruptcy (OSB), advising him that, due to his status as an undischarged bankrupt, he has no standing whatsoever to initiate legal proceedings like this. In other words, Patrick has been ***told*** by the OSB that he can't do this, but is proceeding with it, anyway. Most judges would be a little annoyed with that.

More importantly, if it were me, I would emphasize to the judge that Patrick had been encouraged ***for months*** to contact the OSB to clarify his status, and for all that time he refused. That's the sort of thing that would make the court furious -- that Patrick explicitly *refused* to clarify his status before proceeding with this action. That's the sort of thing that not only defeats your motion, but inspires a hefty costs award against you.

Who's to say what will happen in 14 days? But if history is any guide, Patrick is in for another legal ass-kicking.

I keep wondering if Patrick is trying to create a new, and (marginally) more credible version of the legal gibberish that so-called Sovereign Citizens keep trying to foist on the courts. Miserably at it if he is.

He really should consult with counsel before doing anything, but we all know what counsel would recommend -> “Get your own affairs in order before you go pulling this kind of stunt”.

I was watching Suits last night, and I couldn’t help but think to myself that Patrick is a low rent version of the Mike Ross character - only without the memory or skills - sort of Mike Ross as he is before Harvey Specter hires him.

Looks like Twatrick "Boy Lawyer" Ross has weighed in on all this...still rather amusing that he's chosen to omit the bit about being an undischarged bankrupt with no legal standing to initiate action on anyone but apparently he knows better than actual lawyers:

Ano @ 12:46 PM: I have to say, it's adorable how I can have destroyed Patrick's life over a decade ago, and left him an unprotected, undischarged bankrupt with no home, no appreciable career options and no personal relationship of any kind, and owing me $110,000 with me now garnishing his wages and forcibly seizing his assets, and he still thinks he has the basis to mock me.

I'll simply take his money, and try to get over it.

P.S. It is also worth appreciating that, in the 12+ years this has been going on, Patrick has lost every legal action involving me. Every. Single. One. More amusingly, before every one, he bragged openly about how he was going to totally mop the floor with me, and he was going to embarrass and humiliate me, and so on, and so on.

And yet, here he is, having learned absolutely nothing in those 12+ years but continuing to insist how he is going to kick ass.

Good luck with that. And Patrick is welcome to pay me my $110,000 whenever is good for him.

Patrick Ross is all puff with no tough.

Seven days until Twatsy Ross gets his ass kicked LEGALLY in a courtroom.

He can't win anywhere; be it a schoolyard, courtroom, or a bank. Someone's got him beat anywhere he goes.