It's official: TUPOC now has a permanent military compound for further social disruption.

Just now (2 a.m. Saturday morning) drove by the military compound of "The United People of Canada" (TUPOC) at St. Brigid's in the Byward Market, to see the same "Freedom Convoy"-themed shitbox SUV (shown here from earlier in the week): 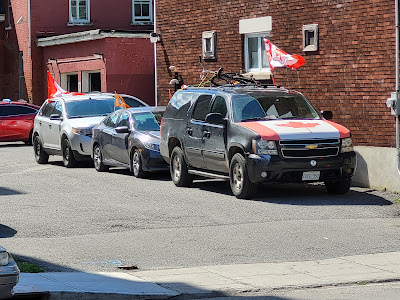 parked at the entrance; I was also lucky enough to see, in the dark, an individual walking by said shitbox, wearing a dark jacket with the word "SECURITY" emblazoned in white on the back so, at this point, I think we can all safely conclude that TUPOC has moved in for good, and they are not interested in any company or community engagement or your opinion; what they want is a base of operations for further mischief and mayhem.
More disturbing are the rumours that Canada's white nationalists are planning another invasion of Ottawa the weekend of September 10-11, and I'm sure it's just the most glorious of coincidences that that is the same weekend of the Conservative Party of Canada's leadership convention, where insurrection and violence fan boi Pierre Poilievre hopes to land the top job in Canada's fascist party. (No, not the PPC, the other fascist party.)
So, prediction: TUPOC's "Embassy" on St. Patrick St. will become more locked down and militarized over the next few weeks, culminating in a full-blown occupation come that weekend in September. I'd love to be proven wrong but, sadly, I have an annoying reputation for calling this stuff.
A MODEST PROPOSAL: While TUPOC refers to their home base as their "Embassy," if we could all start describing it as their "military compound," that'd be great, thanks.
P.P.S. I predict security fencing by the end of August. Let's watch.
Posted by CC at 2:39 AM

I trust that TUPOC and their security have all the proper permits...

Last newspaper articles said they did not.

I doubt they need any certification just to have some convoy-brained geezer sit in a truck all night, or wander around the building checking on stuff. The certification most likely comes in when that brain-damaged idjit tries to enforce some sort of law, or claim he has the authority to make a citizen's arrest. That's when it will get interesting.

They’re going to run a court in the church basement based on whatever weird gibberish the Freemen on the Land crowd likes to spew.

… this will not end well.