"Sure, let's take legal advice from Ezra Levant. How can that end badly?"

Oh, look ... another gullible mark whose business was annihilated by Rebel News' shameless, opportunistic and obscenely profitable "Fight The Fines" and/or "We Won't Ask" grifts: 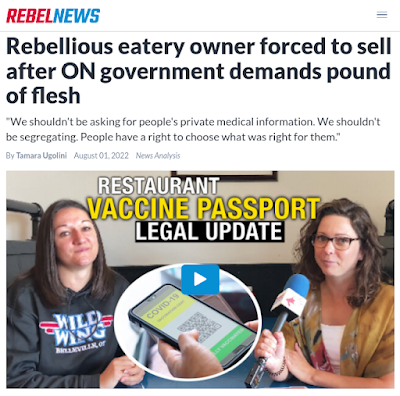 This particular victim would be the indubitably gullible Jackie Banas, who was convinced to associate her Belleville "Wild Wing" franchise with Der Rebel, promising to stand strong in the face of public health bylaws in exchange for fawning publicity and free legal counsel. So, Jackie, how did that work out for you? Well, shit ...

Gosh, Jackie just got her ass kicked with thousands of dollars in fines, and is finally cluing into the fine print, wherein Rebel News wanted only to milk Banas' business for the donations and donor contact info, but has not the slightest interest in covering her fines. If only someone had warned people like Jackie about that, oh, wait, I did, countless times, including in this piece from over a year ago: 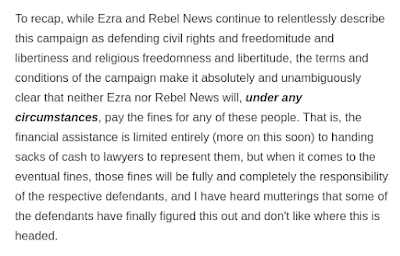 Here, let me smugly and lovingly emphasize the part I have been warning ignorant marks about for at least two years now:

... neither Ezra nor Rebel News will, under any circumstances, pay the fines for any of these people.

But, wait, there's more, as I so presciently continued in that same blog post:

"In addition to possible fines, said defendants may also get towel-snapped in the nads with substantial costs, ..."

And, once again, I called it as you can read above that not only did Banas get kicked with $21,000 in fines, but was further whacked with $5,000 in costs, exactly as I had predicted. In the end, maybe Banas will have learned that Rebel News had no interest in her rights or freedoms; those blatant Rebel News grifts raised many millions of dollars, with every penny going into the pockets of the associated folks at Rebel News, who are undoubtedly now enjoying the fruits of their labours:

As for Banas, well, I told you so. Many, many times. Maybe next time, you'll fucking listen.
Posted by CC at 3:53 AM

I remember reading about this case and others like it, and I don't think anyone has emphasized enough that there was no way this case was winnable. Absolutely no chance. Canada's Charter makes it clear right in paragraph 1 that someone's rights are "subject only to such reasonable limits prescribed by law as can be demonstrably justified in a free and democratic society." And in the midst of a global pandemic, implementing mandatory public health measures is totally reasonable.

What this means is that any competent and ethical lawyer would have told Banas that she had no case. It means that Rebel's lawyers deliberately led Banas on and gave her false hope and kept crowdfunding off of her case, knowing she was going to lose.

How many other suckers did Rebel screw this way, leaving them holding the fines and costs bag? Is anyone keeping track?

Strange how the article never once mentions the tyrannical Conservative government of Doug Ford being responsible for Ms Banas' troubles. She was convicted in provincial offences court of violating Ontario public health orders. Judging from the comments, the average thumb-sucking Rebel viewer holds "Justin Castro" responsible.