PUBLIC CHALLENGE (Sunday morning, Aug 7): Since I've posted compelling evidence that there is no possible way Sheila Gunn Reid and her pet law student Sarah Miller can justifiably claim that a 1-day return trip to Geneva should cost even close to $15,000, I challenge Gunn Reid to publish the receipts for the air fare for the two of them. She's free to redact any personal information, of course, but I think she owes her donors the proof that this delightful Swiss vacation is truly costing that much. I predict silence. Let's watch. 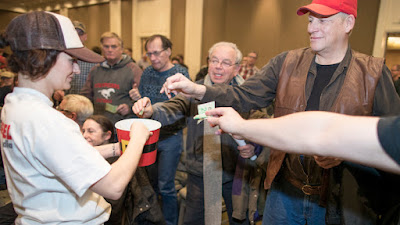 but which I proved would set two people back less than $4,000 (CAD) if purchased as little as a couple days ahead of time:

leaving Gunn Reid and Miller with a cool $11,000 to blow on a single night of hotel.

Receipts would be nice.

P.S. Uh, I also proved that there is absolutely no need to travel to submit such a complaint, as the UNHRC provides both an e-mail address and a fax number to do just that:

But when your demographic is inarguably the dumbest collection of human beings outside of Chris Selley's office, well, might as well milk the rubes while the milking is good.

P.P.S. There's actually more going on with this ridiculous scam than you know, but I'll save that for tomorrow. In the meantime, you can read Gunn Reid's jaw-droppingly asinine and disingenuous thread on all of this here. 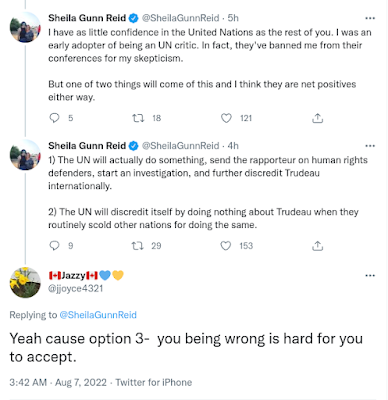 Exactly, option three being that the first person at the UN who peruses that horked-up hairball of a moronic complaint from barrister Sarah Miller will tell the two of them that it's the stupidest thing they've ever seen since Chris Selley's last column, and tell Sheila to please fuck off back to her trailer park.

AND THE INTERTOOBZ PILE ON ...

I am assuming "boot use" should read "both of us", suggesting $6,000 total would have been more than enough for Gunn Reid and her ventriloquist dummy Sarah Miller. Where is the rest of that $15,000 going?

Didn't Lauren Southern claim she quit Rebel Media because Ezra told her to keep fundraising for a group trip to Israel, even though the fundraiser had already collected more than it needed? Is there any evidence of that?

What does any of this dishonest bullshit have to do with Justin Trudeau? I read that complaint and it's hard to believe Sarah Miller is an actual practising lawyer given all the lies in it.

Virtually every example in that craptastic document is under PROVINCIAL jurisdiction, and has nothing to do with the federal government or Justin Trudeau. How is it possible that Miller doesn't understand that? How stupid is she?

How is it Sheila is unable to deliver a document without help? Someone should tell her that Canada Post will get it there for $2.71.

Ironically, for Sheila to fly Air Canada to Europe, it must be true that:

* She is fully vaccinated.
* She wears a mask during the entire flight.
* She uses the ArriveCan app upon her return.

All of the things she is currently telling others to refuse to do.

What a sleazy fucking hypocrite.

Not sure what to make of her. How the fuck can anyone take Ezra or SGR seriously? Lawyers wanna get paid, I guess. Grifters gonna grift.

But it doesn't mention she is Pawlowski's lawyer.

She herself gave feedback thanking most of the people who rated her, which seems weird to me.


It looks like she represented a pastor against a fine in late 2020, I think before Rebel hired her to represent Pawlowski.