HAHAHAHAHAHAHA!!! Sheila Gunn Reid in Geneva ... I so fucking called it.

First, Gunn Reid and Miller will arrive at UN HQ, where one of them (Gunn Reid, I suspect) will launch into a pompous diatribe about how those two brave freedom fighters have now arrived at the UN, in order to file a complaint against Justin Trudeau about the appalling treatment of political protesters back home, ... 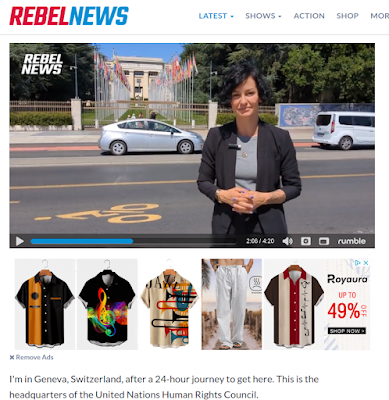 Holy shit, I'm good.
You're welcome.
We're not done here.
YEAH, IT GETS BETTER, as I predicted that the UN would be happy to "take" their complaint just to get them the fuck out of the building and stop wasting their time [emphasis tail-waggingly added]:

The receptionist, still confused as shit, might simply say that, sure, she can pass this on and will take the complaint and thank them for coming and if they would be so kind as to fuck off because there is real business happening here, that would be great, thanks.
On the other hand, said receptionist might not want to have anything to do with these two loons and will ask someone else to come to the desk, at which time Miller will once again launch into her canned speech about how she is a very important civil liberties attorney from Canada (she isn't) and blah blah blah, and this next person, just as confused, will accept the complaint from the two dingbats and thank them for their concern, and if they could now fuck off, the UN is actually trying to get some real work done involving, you know, genocide and not, you know, provincial bail hearings.

You people really don't appreciate me.
OH, SHIT, I ALMOST FORGOT ... I also predicted this:

And, in fact, the mentally-deranged Gunn Reid yammers on about Trudeau constantly, despite him being mentioned only twice in the "complaint," and almost every example in the complaint being under provincial jurisdiction and having nothing to do with Trudeau.
Fuck, I'm good. Really, I am that fucking good.
Posted by CC at 4:12 PM

Yeah, yeah, you're so good, have a whole box of cookies. :D

Now stop preening and check their fundraising for this trip. It says their goal is 2000 donations instead of giving a money amount, and they are at 73%.


Did they alter their goal? A little sensitive to your calculations about the cost of their trip? You are good!

SGR explicitly claimed that this trip would cost more than $15,000, but Rebel News now conceals how much they raise for any fundraiser by disclosing only how many donors there were, in order to be utterly unaccountable for the amount collected.

...a 15-page summary letter, and hundreds of pages of meticulously compiled evidence.

Let me guess, the police infringed on the Fuckers' Brigade's rights by not providing enough bouncy castles, hot tubs, and hot oil massages, and doing such in a timely manner? For god's sake, they spent the better part of three weeks cordoning off several blocks of a major Canadian city's downtown - all without a permit, might I add - and what did the police do? They stood around and did nothing, or worse than nothing, they helpfully directed traffic to the Fuckers' Brigade when they brought in fuel for their vehicles. Man, those poor, oppressed people.

Seriously, can anyone think of another time in Canadian history where a large part of a city's downtown was blocked over a period of several weeks in protest, and the police did absolutely nothing?

Also, 15 pages to summarize things? I could see two...maybe three at most in doing any type of summary, but 15? What size font did they use, size 72 Courier New font in bold typeface? Actually, Courier New's proabably too professional for them. Comic Sans is probably more up their alley.