Straight off the presses from one of my tipsters (minor editing):

CTV's somewhat gormless "The United People of Canada" HQ fluff piece included an interview with this girl who said TUPOC "welcomed all kinds of people": 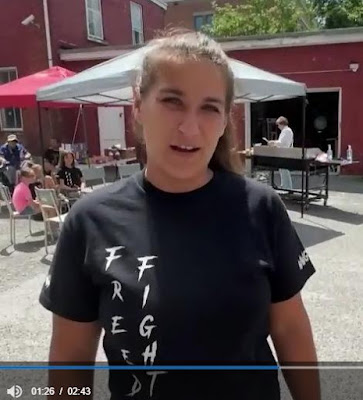 but she was there to do an invu in front of the white van below to promote the slo-roll convoy meets she's been organizing in different cities "for the last 9 weeks ... it started in St Jerome" she says.. New regroup is called Convoy St Jerome 2022, here is their Facebook page:

Blond with her from Gatineau says the goal is to regroup the good feeling of the convoy supporters in Ottawa & the contact for events is JD Freedom: 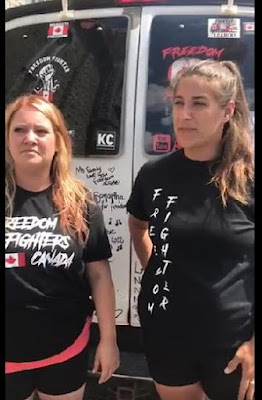 JD Freedom is a French convoyer from St Jerome who does podcasts & FB vids about World Economic Forum, chemtrails, Trudeau, Dutch farmers. He had the Freedom Fighter Ts made & sells them [it's always a grift about the fucking merch, isn't it? - Ed.]. He was at TUPOC HQ to shoot a piece about it. This is him: 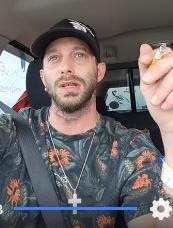 and this is his truck: 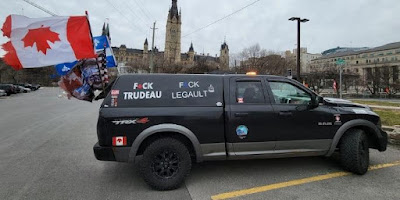 and this is his car: 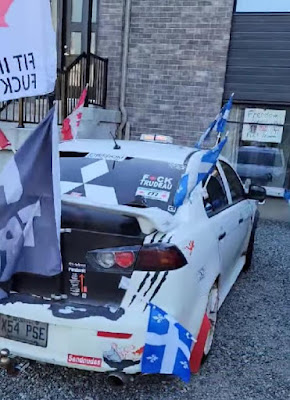 So ... can we quit with the bullshit that The United People of Canada are anything but a "Freedom Convoy" front group looking to establish a military base of operations for fascism and white nationalism in the Ottawa core?

Tune in tomorrow when we here at CC HQ will have more critically important information about "The United People of Canada," while CBC and CTV continue their Justin Trudeau vacation watch.

We may be on the verge of finding out. TUPOC let slip on their Facebook page that they're creating a "Private Security Force".

If we cut through all the bullshit directly to what we know is happening here - TUPOC is creating a "war-room" and providing space and support for the "Freedom Movemement's" network of astroturf antigovernment organizations. ("Adopt a Trucker" is one of the organizations participating in their "community conversation" on "Freedom".)
As we all know, the actual goal has nothing to do with Vaccine Mandates; this is about provocation, creating and capturing telegenic moments of confrontation that can be spun as "heroic resistance to the elites", yada yada yada. Adding a "Private Security Force" to the mix is about as positive a development as the Rolling Stones' decision to have the Hell's Angels provide security at Altamonte.

It took what? A whole 30s looking at a map to figure out that the purchase of this church was to establish a base of operations for their next occupation of Ottawa - if that.

... and ever since then, they've all but admitted that's exactly what they are, and they keep admitting it through words and actions.

EVERYONE: As I don't do Facebook, feel free to get screengrabs from FB and email them to canadiancynic@yahoo.ca. Thank you kindly.