Rebel News terrorists: Where are they now? 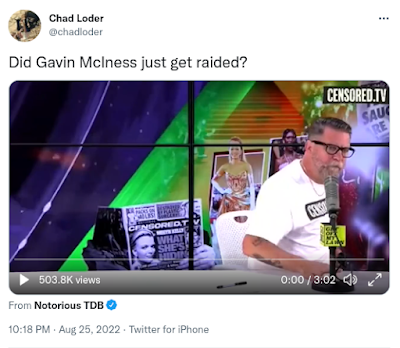 Surely it's only a matter of time before Adam Soos ...
P.S. Well, this is an interesting thread.
Posted by CC at 3:37 AM

You should do a post on where all these con artists have gone and what they're doing now. What's up with Lauren Southern and Faith Goldy and Gavin McInnes and Laura Loomer and "Dr." Sebastian Gorka and the rest of those cretins? That would make for a fun post.

There seems to be an odd balancing act for would-be right-wing-nut leadership. They're on a knife edge--if they're not crazy enough, they can't generate the kind of bizarro-world charisma the extreme right seem to love, that sort of "say whatever shit I want" swagger. But if they're too stupid and crazy, they inevitably do stuff that screws them up in the real world. And of course, the very things that can propel them to stardom in the fringe crazy where they start, tend not to go over well, or even be actionable, as soon as that fringe stardom starts introducing them to a wider audience. When they get to a certain level of well known, they flame out.

So it takes quite a bit of cunning for one of these people to last very long. And even then . . . In fact, it's possible that the knife edge actually has less than zero width--there may be no level of crazy that is both "crazy enough for the wingnuts" and "sane enough to function in broader society". That may be why so far, all the longer term, bigger league leadership of the far right crazies comes from normal politics and then starts making use of them. Like Poilievre or Bernier. Even Trump himself . . . before he got into politics, he actually hung with Democrats more than Republicans (if only because he was in New York and Democrats have the power there), but at one point commented that if he was to go into politics he'd want to lead Republicans because they're easier to fool.