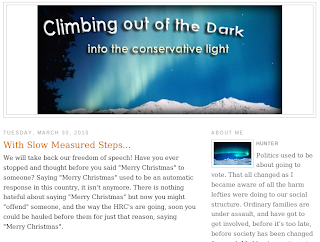 Honestly, they just fail me.

Didn't the 'war on christmas' end somewhen around Dec 26th last year?? Or is BillO still droning on about it?

These people are lying. I was very observant last Christmas and people overwhelming say "Merry Christmas." The majority of people just don't care.

These people don't talk to anyone; they have no real friends and they don't socialise well. They confuse secular advertising in stores with norms of human behaviour.

Nut cases. Medicate them and put them in a locked ward.

Just typical to raise Christmas during Passover. What a raging anti-Semite.

Where do these assholes come from?

Hunter must have driven down to Calgary to attend Coulterpalooza, so she's making up stuff about what is a legitimate HRC case and what is not.

Hmm let's see, what are the news items today? Can you really see Huntsy (no disrespect) battling it out with anyone on the subject of, say the Geurgis letters...hmmm or, the Conservatives gutting environmental safeguards or defunding AIDS research internationally ? If there's anything Huntsy knows how to do it's play safe!

Meanwhile, I am sure every BT will be commenting on this.

looks like the gwox is starting early this year.

Gotta link for this?

Me thinks Hunter got her seasons mixed up...perhaps she should be following Dodo Can't spell, Maria for guidance as far as the calendar is concerned.

Perhaps it's a slow news day for Hunter over at the Blogging Romper Roomies.