Sure, let's talk about civility.


I truly love my readers. Via private e-mail, "Ron" from UWO sets the stage:

I am currently a student at the University of Western Ontario in London Ontario. Today Ann Coulter will be speaking at our campus. I am forwarding you a mass email that I and all other attendees just received from Kathy Sheidle [sic] (fivefeetoffury.com). For American bloggers who may not be familiar with her, she's basically Canada's Michelle Malkin or Ann Coulter. [Ed: Um, no. She's way uglier.]

And away we go: 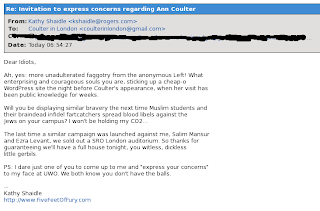 That is seriously adorable, isn't it?

BONUS IRONY: So Kathy is a big fan of 1) Ann Coulter, and 2) Jews. Perhaps she can ask Coulter about this:

Coulter: We want 'Jews to be perfected'

... When [CNBC host Donny] Deutsch responded, "It would be better if we were all Christian?" Coulter said "Yeah."

Deutsch, himself Jewish, continued to press Coulter on her remarks, asking, "We should just throw Judaism away and we should all be Christians then?"

"Yeah," Coulter responded, adding "Well, it's a lot easier. It's kind of a fast track."

"You can't possibly believe that," Deutsch responded. “You can’t possibly. You’re too educated.”

"Do you know what Christianity is?" Coulter replied. "See, we believe your religion, but you have to obey. We have the fast track program."

Later in the interview Deutsch asked Coulter if she doesn't want any Jews in the world, Coulter responded, "No, we think - we just want Jews to be perfected, as they say."

"Wow, you didn't really say that, did you," Deutsch said.

Yeah, Donny, she went there. Deal with it.

If by adorable you mean a vile cunt, then yes, she is adorable.

Another grad of the "make money quick online" course. She did a very good job of adapting the required "thanks for the traffic" smirk to apply to her event.

Madame is losing her sang froid.

I believe that students got in for free. The rest paid a whole ten bucks.

I believe that students got in for free. The rest paid a whole ten bucks.
Pikers.

If you want to see a real pro on the make money quick event circuit, check this out!

Jim Parrett said...
This comment has been removed by the author.
9:28 PM

That email has to be a fake. No way someone is that ignorant. Isn't Shaidle a huge hero to the right? No way do Canadians respond to the viciousness and paranoia of the intellect (?) behind that garbage email. I don't venture into the rightosphere so I'll have to take your word for it but, wow, it's debilitating to realize I live in the same country as the thing that wrote that email.

The message was sent to the people who put up this site.

Looks authentic to me. Shaidle's style isn't really as sophisticated as she would like to believe.

She's hoping they'll publish her message on their site. It is obviously designed to encourage such a reaction. She hopes they include the link to her site so a) she can get AdSense hits and b) get some fresh IP numbers for stalking.

Jesus Christ, first Palin is invited to spew in Calgary, and now Coulter's invited to perform her Adam's Apple throat yank to WOU students? What the FUCK?

the message was sent to the people who put up this site.

Reading the other 'viewpoints' on that site was like playing "Find the troll." I can't count how many times you find the 'business' owner who somehow thinks that university education is beneath him or her and only his precious little children are the only ones who can 'generate an original thought' in the midst of 'liberal brainwashing.' Of course, nepotism never enters that equation. That tirade predictably ends with how everyone else will be in indentured servitude to his children and 'magnificent' business. If one has to project that much with lysenko-like anti-intellectualism, chances are his 'business' is not going to be anywhere near the sophistication of a Fortune 500 company. It is probably a string of hot dog stands.

Haha... I love that interview. So, Jews should convert to Christianity, because Jews are actually required to be good people to go to heaven, but Christians get in automatically, even if they're not good...

It's like "Hey Jews, come be Christians! It's like being a Jew, except that you get to be an enormous ass-bag your entire life without facing any consequences!"

I don't care if Shaidle holds her CO2 emissions, as long as she's careful with the methane.