Here's some video of terrorists in training, set to the ominous plonky throb of 80s goth band the Sisters of Mercy. Teh awesome! Apparently, nine of these Chritians terrorists were arrested and have now been charged with a laundry list of crimes including plans to attack police, seditious conspiracy and the attempted use of weapons of mass destruction.

In court filings unsealed Monday, the Justice Department accused the nine people of planning to kill an unidentified law enforcement officer, then plant improvised explosive devices of a type used by insurgents in Iraq to attack the funeral procession.

Eight of the defendants were arrested over the weekend in raids in Michigan, Ohio and Indiana. A ninth remained at large, the Justice Department said. The indictments against them were returned last Tuesday. The defendants were identified as members of Hutaree, described by federal prosecutors as an anti-government extremist organization based in Lenawee County, Michigan, and which advocates violence against local, state and federal law enforcement.

Having a snoop around the net it doesn't look like the mainstream media is reporting these psychos for the vile creatures that they are, the word terrorism is strangely absent from reporting. There are lots of cute euphemisms to avoid saying the word, they're militants, militia members, christian militia, alleged militia members... hell Sky news just went with the headline "Christians Charged with Police Murder Plot" It wasn't until the bottom of the first page of Google News results that MyFox Detroit went so far as to declare "Radical Christian Extremists Arrested for Planning WMD Attack". Yet nowhere in their report does the word terror appear.

Little surprise of course that the insane people are rallying to the side of these murderous crazies. Surgically sculpted garbage jet Pam from Atlas Shrugged comes out of the gates howling DESPITE RECORD LEVELS OF ISLAMIC TERROR IN U.S., FBI RAIDS CHRISTIAN GROUPS and the comments thread there is a real treat. In that little intellectual slum it all comes down to a Muslim conspiracy and Obama as anti-christ. Wowzers.

It will be interesting to watch how this all plays out, who wants to lay money on these poor martyrs never seeing the inside of a particular Cuban destination.

CC HERE: All quiet on the wingnut front ... 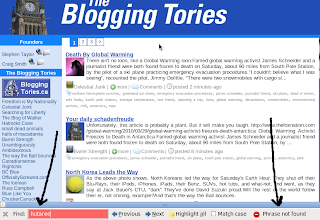 You had to know that was coming.
Posted by Lindsay Stewart at 3:50 PM

Umm, they're not "real" terrorists unless they're Muuuslums, preferably brown ones.

You'd think that if the USA wanted to take terrorism seriously, they'd have a national security reason to shut down confusing noisemakers like Pamela Geller or some of the places she gets her "news" from.

but she's a patriot, you can tell from 'cos she's got stars in her eyes and stripes from all the face lifts and little procedures.

Huh ... 7 pm and still not a peep from the kids on the short bus. They must be working on an awesome excuse.

I'll bet it's the Liberals' fault.

I'm not conspiratorial but I am paranoid. How, after all that publicity about the guv'mint spying on Americans' phone calls and Americans' e-mails, can someone send bomb-making instructions through the intertubes?

From the looks of it, the feds laundered their illegally obtained evidence through the state police, who went to the local judge with stuff they got from their "confidential informant," and got a legitimate state wiretap.

It's the liberals' fault.

On the other hand, the Russians, in some ways, have brought their subway suicide bombing on themselves. http://thinkprogress.org/2010/03/29/kristol-russia-bombings/

You just know if they were Muslims or brown the Blithering Idiots would be in full lets execute the motherfuckers NOW...
I'm sure these Christians were a hundred times more organized and deadly than the Toronto gang.... and yet none of fetus fetishes and other miscreants want to condemn....

I'd mock them for being hypocrites but I doubt they can even comprehend that... They are just looking for other shinny objects...

This is too funny! Look at the main articles in the screen shot. All about a global warming activist freezing to death in Antarctica. Google "James Schneider antarctica" to see how many of the usual idiots are smirking about this.

Then check here. There's also an article about the Bali conference of 2027 where it was decided the world would do something about climate change. Or just check the bottom of the page for the disclaimer.