Baby's got her brand new shots.


The little princess during her first trip to the vet ... 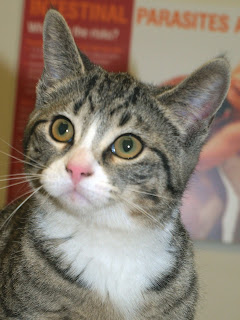 ... having no idea what kind of bad craziness is about to go down. It seems like only yesterday: 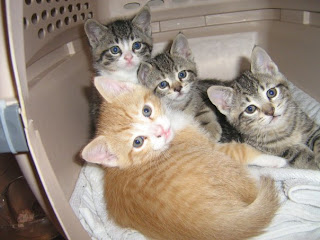 Yeah, that's her at the back, looking all sweet and adorable. Now she's just evil. I have the scars to prove it.

Aawww. Look at that cute li'l pink button nose. And that pretty jabot of white fur. So sweet. So innocent.

But srsly CC, it's not her fault. She prolly went crazy at the vet's when she saw the advert for the Blogging Tories. If you look closely at that pic you took there, you can read "Intestinal Parasites".

Don't ever invite Warren Kinsella to a BBQ at your place.

Wow, bocanut. A Warren Kinsella catmeat joke. Explain to me once again why you're still single, cuz it's a real mystery.

Are you sure your little princess is safe from Springer?

After all he was making threats.

Keep an eye on kiity at all times.

Those BTs are insane.

Bocanut sure knows his way around a bbq though. Women... not so much

And, appropriately, the wv for this comment is 'wantat'. *grin*

heh. occasiionally, i'll drive landlady and her dog to the vet. he just goes in for a check up and to get his nails clipped, but i always tell him he's going for a shot. cuz i'm a dick.

I just found this site. It's pretty damn good. I'm from around Etobicoke. I look after a large colony of very well fed and happy wild cats near hear. Any takers?

Stephen Harper lived around the corner and went to my high school (Richview). His nickname them was "Stinky". Really. He's lived up to it.

Took the words right out of my mouth, deBeauxOs. :lol:

Robert, I think you have more in common with Stinky that you'd care to admit.

bocanut is a splendid specimen of Intestinal Parasite, is he not?

Does Bocanut even rate as highly, as an intestinal parasite?

Heh. I have a friend who does this and his dog (who I'm convinced, understands English perfectly) whine-barks in protest, as if to say "Don't tease me like that!"

Jennifer at Runesmith's Canadian Content seems to be having a little stalker/harassment problem with our desperately dateless Bocanut. Is it time to alert the authorities?

I feel much better now that I've found out who Bocanut is. It would be positively alarming to receive anything intelligent from such a bloviator.

The reincarnation of the Algonquin Round table right here at CC's.
Who would have thunk it?

nah, buddy's as dumb as he is good looking. he knows "cookie" (milkbone), "bone" (bone) and "walkies". still working on "no". all done for landlady's amusement. before driving off, i'll turn to buddy in the back and hold up my index fingers about eight inches apart.

The reincarnation of the Algonquin Round table right here at CC's.
Who would have thunk it?

Bi-Guy:
Algonquin PARK is in Ontario,Iffy's most favourite place in Canada which he hasn't visited since he came back.Too busy stroking his purebred pussy I suppose.

Yes, boca, Ignatieff is such a poncing dilettante. Unlike that Stephen Harper, who's happy simply commandeering centre stage at the National Arts Centre Gala so he could, once again, be the centre of attention.

Jes' reg'lar folks, that Steve, is that it, boca? Now fuck off, you imbecile. The women around here are starting to get creeped out.

bocanut said...
This comment has been removed by a blog administrator.
3:21 PM

Fuck off, boca. Go troll for women somewhere else.

bocanut said...
This comment has been removed by a blog administrator.
4:24 PM

Give it up, boca ... the women here aren't interested. They still have all their teeth.

bocanut said...
This comment has been removed by a blog administrator.
4:38 PM

Seriously, boca, the only feedback I've seen about you from the babes around here is "Ewwwwwwwwwwwwww." Take a hint.

bocanut said...
This comment has been removed by a blog administrator.
6:31 PM

bocanut said...
This comment has been removed by a blog administrator.
6:56 PM

I'm curious, boca ... do your relationships normally end with a restraining order? Or do they involve a mysterious disappearance, a shovel and ten acres of wooded area out behind your house?