Whoops, I guess that should have been redacted, too.


I told you to cross out that part:

The accusation that detainees were killed by Afghan army or police officers comes from a Canadian soldier with the Royal Canadian Regiment who served in the Panjawi district. Upon returning to Canada, he told a military doctor treating him for stress about his concerns.

"After they handed over the detainee, the local authority would walk the detainee out of range and the detainee would be shot," says a 2008 report on the soldier's claims. "This occurred on more than one occasion."

Canada's Blogging Tories will undoubtedly seize on what comes next:

The doctor told investigators about his patient's allegations since they involved possible criminal activity. He added that those who return from Afghanistan with stress-related conditions sometimes exaggerate, and that the killings may never have happened.

Those same Blogging Tories will, unsurprisingly, not bother to read the very next paragraph:

"However, the condition that he does have would not give him any reason to lie. Therefore, he may be telling the truth," the report said.

In addition, the BTers will blame the Liberals. I'm pretty sure about that.

ALL QUIET ON THE BT FRONT: Unsurprisingly, Canada's Blogging Tories are still rousing themselves from a good night's sleep and putting on the coffee before they wander off to the fax machine for today's talking points: 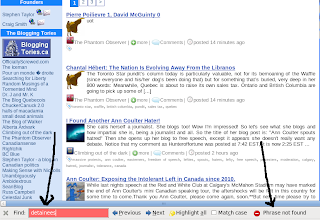 Would anyone like to predict how the rest of the day is going to go?

They are so predictable after all.
By "they", I mean the drooling idiots know all Conservatives.

But hey, we are winning.... And to prove it, we will not be releasing any more injury reports, only a yearly little press release (that will be ignored because we send it out on Friday 23:00, x-mas eve)....

But by gosh, we are winning the war there on all those bad bad men.... and women.... and children...

Unknown said...
This comment has been removed by a blog administrator.
12:10 PM

Once again, fuck off, Wayne.

This blog is the living breathing example of "applause chamber" that Rex Murphy was talking about on CBC the other night.

My comments would bring balance to your comment section. It is dull here without me.... Patrick or Bocanut.

oh good lawd wayne, you bring nothing but the matte, toneless absence of sheen to these comments that define dull. you are a tonedeaf twit, you are utterly blind to nuance and what passes for balance in your lentil sized cranial sac is the thoughtless repetition of the daily talking points. that a parrot like you would have the witless gall to accuse anyone of running an 'applause chamber' is beyond laughable and verging on the surreal. now go away, dullard.

Wayne accusing others of being an echo chamber whilst being a living example of one himself.

Only the cows are listening Wayne...

And yet, Wayne manages to ignore the bit where I, Ti-Guy and others disagree with things posted on this blog on a weekly basis...

I'll leave that last comment of Wayne's up there since everyone had such fun paddling his ass. Oh, and Wayne? You are the very definition of vacuous nothingness. Now fuck off.

Meanwhile, hunter stands up for free speech by censoring this:

======== hunter March 26
So you censor and deny free speech because you claim somebody else did the same? That is so typical of far right extremists like yourself. Throw the principle out the window when it's inconvenient for you and your peoples' pursuit of raw power. The hypocrisy is breathtaking, and not unexpected from the far right. Please stop calling yourself a conservative. You are anything but, and you are an insult to conservatives.

This is why Canadians do not want a Harper majority. You would soon be claiming that since the Soviets murdered millions of dissenters, it is ok for the Harper regime to do the same. Your complete lack of principles is frightening. Your willingness to do anything that any despot has ever done and claim it is ok because some despot did it, is disgusting.

I think this post of yours, shrieking about free speech while excusing your own censorship, is truly the most hilarious Friday Funnies yet.