Should Blogging Tories "Hunter" and Maria "Dodo" Nunes be marked for death? No.


Of course not, don't be silly, that's not the way we progressives deal with our ideological opponents. But under the circumstances, it seems like an almost reasonable question since both Hunter's and Maria's panty-moistening hero -- one Sarah Palin, the Hillbilly from Wasilla -- has (as mentioned in my previous post) publicly announced that the proper way to deal with political opponents is to "reload", "aim" and "fire", complete with crosshair graphics.

And how fantastically irresponsible, given the rancid racism and eliminationism that had been spewing from her followers during the 2008 presidential campaign. One would think that anyone with the sense God gave a sack of soup would have figured out by now that American political language loaded with allusions to targeting and gunfire is just not somewhere you want to go these days since, when conservatives are involved, that generally ends badly.

So, at this point, it seems safe to ask how either Hunter or Maria would feel if someone wrote a blog post or produced a YouTube video, listing them by name, replete with weapon-related imagery and publishing a map showing where they live under the graphic of an obvious rifle sight.

Boy, I'll bet there would be squealing. Without a doubt, the Canadian Idiot-sphere would be in a state of high dudgeon, screeching hysterically about murderous leftards and what not, yessir. And yet ... and yet ... when it's one of their heroes, well ... 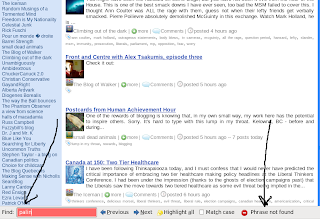 In any event, given that Hunter and Maria are such unabashed groupies of Palin, it seems only fair to ask them how they feel about this latest little spate of similarly-unabashed eliminationism. And it gives us a chance to finally admit that Hunter was, against all odds, right about something when she wrote, so presciently, so long ago:

What was gained? Nothing, except showing how scared the lefties are of Sarah Palin.

I'd personally ask Hunter and Maria what they think of Palin's latest stunt, but I already know what I'd hear: "Oh, man, those lefties take everything so seriously, HA HA, it's just a metaphor!" And we'd hear no more ... until someone died violently. But, at that point, it wouldn't be their fault, would it?

P.S. If memory serves, it was Canada's Blogging Tories who were clutching their pearls with great emotion upon the publication of the photo representing the alleged Liberal fantasy of the assassination of Stephen Harper.

AFTERSNARK: When you've lost a deranged right-wing loon like Elizabeth Hasselbeck, well, you've pretty much given up on that portion of the electorate that represents even remotely sentient thought.

MaryT gets you right in the zone (from one of the Coulter comment threads):

I wonder how many of those students are there on their own dime, without any loans or parent's help. Bet not many, so, until they pay their own bills, and go to a university funded without taxpayers help, they have no rights to decide who can or can't speak. What if we taxpayers decided they didn't have a right to attend said university. What if we taxpayers told them they had to shut up, and couldn't speak. Hey, it is our institution, expel them all.
Use their tactics against them.
I would like the names of all those idiots, and when they apply for another student loan, DENIED.
When they apply for a job with the UofO on their resume, DENIED.

Got a link for that? That's just precious.

Well, I have to take issue with Mary T, if not el mystereeoso his or herself.

The whole point of cutting taxes, eliminating the death tax and deregulating, not to mention starting another war, is to be able to pass your wealth on to the natural objects of your bounty, instead of some undeserving unreal American or unreal Canadian reprobate darkey. As long as King Stephen spreads the wealth among your better classes, I have no complaints and don't care if they dissipate that wealth on college.

HA HA, it's just a metaphor!
Do these imbecilic children even know the meaning of the word metaphor?

While I hope it does not come to this, "The Killa from Wasilla" might eventually be more appropriate as Palin's nickname.

I just wish American liberals would do the same thing to their adversaries: make veiled references to genocide, mock up images of Republicans in the cross-hairs of high-powered rifles, have blog after blog after blog of basement-dwelling nobodies call for trashing Republican offices, and best of all, recall a recent history of major right wing figures being assassinated. Only because I don't think it's fairandbalanced to have just a few aging and rehabilitated radicals like Angela Davis, Bill Ayers and Bernadine Dorn (people I'd never even heard of until fairly recently) to refer to when we need to scare and threaten our Righties while being sufficiently removed from having to take any responsibility.

Why yes, CC, I do have said MaryT link for your reading pleasure.