Yeah, he went there.


Honest to God, I have no idea what to do with this: 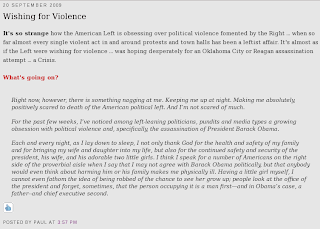 That would be Blogging Tory Paul Marek of "Celestial Junk," finally losing what little grip on reality he had left.

Seriously, what can you say?

That's the craziest fucking thing I think I've ever read.

Right wing people are coming armed with assault rifles to protests, carrying signs about watering the tree of liberty.. while the unarmed versions are wandering around with signs who's slogans dehumanize the POTUS.. while others are trying to prove that he's not American or that he's the anti-Christ or a terrorist manchurian candidate or all three... and it's the left that's violent?

Uh-huh. So the "left" isn't supposed to notice the escalating eliminationist rhetoric and batshit insanity that's had the right in its grip for the last year? Or at least, they're not supposed to *say anything* about it?

I sense a new right-wing "cover-your-ass" meme emerging. Good luck with that, assholes.

Conservatism truly is a complex psychosis.