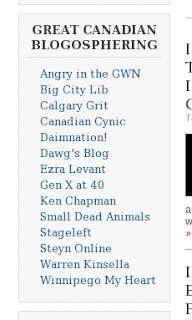 Thank ya very much.

What flavour is it?

How does it feel to be lumped in the same pile as Ezra Levant, SDA, Mark Steyn and Warren Kinsella? Just wonderin'.

I'm sorry! I'm a comedian, not a serious political pundit - I'm trying to be neutral, which I'm sure will make everyone happy. Thanks for the mention, though! Here's my latest article, this is right-jabbing if not exactly left-leaning:

Will, do your self a favour and get rid of Small Dead Critters...

And move up that "Dr.Dawg" feller.

What about hunter's thinly disguised CPC war room? Checking in there today for a laugh, it looks like they gave up on "Iffy", now it's "Ignegative" being test driven. Then the usual moaning about how the media is against them, even though that only reflects the general population.

Supposedly Steve stayed away from the UN to boycott Armageddonjihad. When we know the real reason is the Security Council meeting today, where Canada doesn't have a seat at the table because of Steve's government's buffoonery.

Didja get wafers with it?...

What's wrong with being on that list? There's a small set of sane, educated, thoughtful types, offset nicely by a gaggle of screeching scientific illiterates, dingbats and racists.

Balances out nicely in the end.