TUPOC: So what was the point of all that, then?

Now that the "United People of Canada" have had their asses kicked out of St. Brigid's, and had their asses handed to them in court to the tune of $58,000 in costs, we ponder the obvious question -- what in the name of Garnett Genuis' performance art and childish whining was that all about?
More specifically, given how disastrously badly this ended for them, and how TUPOC director William Komer brought such unflattering attention to himself that former clients of his that he stiffed in terms of wedding photos are going after him for compensation, we ask again: How exactly did Komer and his fellow TUPOCheads think this was going to end?
Think about this. They planned on buying a $6M property, but failed to hand over any actual cash other than that paltry, initial deposit of $5,000. In what universe did any of them think they could conceivably carry through with this plan to conclude the purchase? And as unlikely as it seems, a good friend suggests only one plausible explanation.
They honestly thought they would be able to crowdfund the rest.
Seriously, as ridiculous as it sounds, the only explanation that is even remotely defensible is that Komer and TUPOC really and truly thought they could grift enough in the space of a few months to complete the deal. And why not?
Speculating wildly, it seems that Komer and his merry band of lunatics must have seen the millions and millions rolling in for the "Freedom Convoy" earlier this year and simply assumed they'd be just as popular. Surely (Komer would have thought), if all those idiots were happy to hand over millions just months ago, he could ride the same wave and just sit on the front steps at St. Brigid's and revel in the donations sweeping over him.
But it didn't work out that way, as evidenced by the clear desperation of the panicked plea for $100,000 within a day to keep things moving along: 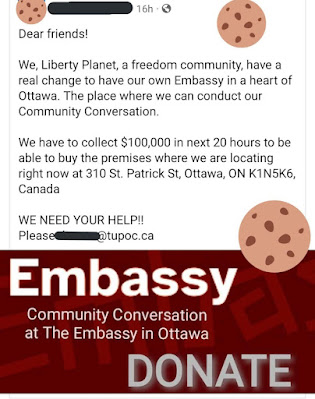 Sure, it sounds absurd, but other than TUPOC suffering under the delusion that they were going to get all that cash from gulllible doofuses in time to pull this off, what other explanation is there?
P.S. It's important to realize that TUPOC is not actually gone, as they are apparently still trying to weasel their way back into Lowertown's good graces by ... 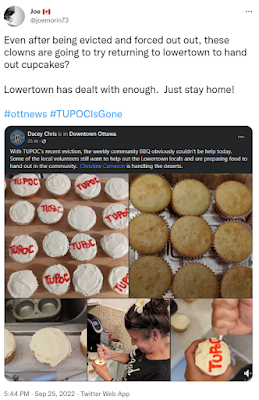 It is entirely unclear what the point of this shameless and opportunistic pandering is, but the takeaway here is that they haven't given up on scamming the local community and still bear watching.
Posted by CC at 5:37 AM

Why would anyone eat a homemade TUPOC cupcake?! A fruitcake maybe, they have a lot of expertise there.

The lesson from this is don't try to hide your right-wing grift. The Convoy grift worked because they were out and proud right wing anti-vaxxers. That led to a flood of cash from like-minded Americans. TUPOC's mistake was trying to hide behind liberal buzzwords, like "incloooosive community." That made the RWNJs skeptical and didn't fool the Ottawa locals who saw the vehicles parked outside the church. Right wingers are simple folk, don't give them tree banners when they want banners with angular symbols.

I assume they have to keep the semblance of SOME benevolent activity going at least until year end, however absurd, to justify their not for profit status.

Anon @ 8:53 AM: An interesting suggestion, but how minimal or meaningless can that activity be to still qualify? It would be absurd if one could justify a not-for-profit status by saying simply, "We gave out some cupcakes once a month to passers-by."

On the other hand, knowing the utter worthlessness of the CRA, would it surprise anyone?

I assume that was the intent of the barbecues - to be seen as providing some visible form of distress relief, however pointless and theatrical.

Another option is that they really and truly believed that they were right and that a million cajillion Canadians were right behind them to sweep the tyrant from power.

The find out part is learning just how few of them they are and just how contemptible everyone else finds them.

Just like in the other post, expect a lot more, "let's not bicker and argue over who killed who."

Fuck them. Their behaviour of callous indiffernce and obviously fascist political goals during the pandemic should be a millstone around their necks for the rest of their miserable lives.

I think you're right, CC. They saw over twelve million dollars (or more, if you include untraceable bitcoin) in potential donations flow into the convoy protest from Canada, the US, and around the world (coughRUSSIAcough), and they thought they could turn it into a long-run grift instead of just a one-time thing.
Like Jason said, their little bubble has them confident that a "silent majority" of Canadians supported the freedumb convoy and that the good times would keep on rollin' on. It's the same old story of conservatives over-estimating their popularity, going back to the "moral majority" of the 70s and 80s.
Unfortunately, the freedumb train turned out to be a one-hit wonder, and the world has moved on, leaving these guys the only ones at the after party.

The Ottawa People's Commission started to meet on Sept 21 in different places at different times. You can see from the article photo they are a smallish group of people in a small place. The first meeting was afternoon of Sept 21.

The second meeting was the evening of Sept 22. Chris Dacey and others went and sat at the back. The clips here are mixed up and unclear:

I am guessing they would be pretty noticeable, and though he might say they didn't want to trigger people, maybe intimidation was the goal. I would like to know more about what happened there.


The official Emergencies Act inquiry starts in Oct but was originally supposed to start in Sept. Maybe the Tupocers wanted to be able to go every day to intimidate people. Maybe they would even try to present themselves as downtown Ottawa residents who loved the convoy.

If they had a long term goal in trying to get and keep the church, maybe that was it.