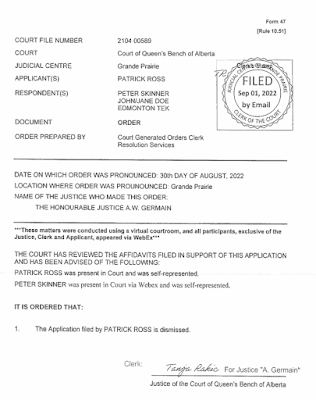 How embarrassing is it when the motion you've bragged about for weeks on social media is kicked to the curb in eight words?
Posted by CC at 2:24 PM

Has Patrick, in all the time you've been dealing with him, won a single legal action?

It seems to lack the brutal terminal impact of "the applicant is a lying piece of shit."

I am getting the transcript.

He's behind the Mulkey's in wins.
(Patrick probably knows who I am talking about even if nobody else does.)

Remember when all the liberal bloggers were telling that guy to get a lawyer and take this seriously because of how fucked he was, and all the rightwing bloggers were urging him to blow it off because blah blah blah?

And where are those rightwing bloggers now? Left him on his own to twist in the wind.

Even if no one else did, I got and appreciated the reference. Though in Patrick's case, WWF/WWE might be more up his alley, so it might help him understand better if you use someone like Barry Horowitz as a reference.

I was going to use the 2008 Detroit Lions and 2017 Cleveland Browns as representative of Patrick's courtroom futility, but upon closer inspection...while they lost all their regular season games, they WON all their preseason games. So as bad as they were, they still found a way to win, even in a meaningless game.

The problem with using Barry Horowitz as a reference for Patrick Ross, is that Barry won some matches. In fact, he repeatedly defeated Bodydonna Skip, including at the prestigious 1995 SummerSlam.

We tried to use Glass Joe from Mike Tyson's Punch-Out! as an analogy, but Glass Joe is officially 1-99 in his career, which is one more win than Twatsy's ever hard. Plus, Glass Joe was kind of hard in the Title Defense circuit on Wii Punch Out. Patrick has never been hard to defeat.

Perhaps we're dealing with a loser of unprecedented proportions with Patrick Ross. There may be no analogous case of loserdom this severe in all of human history.

Yes, Horowitz is more his style. (All that patting himself on the back.)
I've always been a Lions fan so I am glad that even in their most futile hour they will always be way ahead of Patrick Ross.

Seriously, it's damn hard trying to find a level of futility that matches Patty Boy's. Even the 1976 expansion Tampa Bay Buccaneers - who went 0-14 in that year's regular season and lost their next twelve the next year before getting their first official win - managed a preseason win in their first season of existence.

I honestly don't think there's any professional sports team in North America that could match the run of failure of ol' Twatrick. At least not without dropping the number of games and/or going to the first half of the previous century.

If Patrick was a (3) Stooge he would be Joe Besser.

Maybe he's a leader in fantasy law; now the convoy and TUPOC are all going sovcit and giving each other really bad legal advice, but he was out there on his own. He could be called a pioneer in social media legal dumbfuckery.

The judges are catching on, though, referring to this Meads case: