While an earlier post exposed the thigh-sucking hilarity of Lloydminster's Patrick Ross' defenestration at the hands of a Grande Prairie Court of Queens Bench judge regarding Patrick's doomed and idiotic Motion to Strike against Peter Skinner, there is far more happening here than you might think, and it bodes very badly for Patrick in any and all of his current and future legal threats and actions, so buckle up, kids, it's about to get very, very ugly.

Recall, if you will, Patrick being asked directly by the judge about his bankruptcy; specifically, if Patrick had first cleared the filing of his action against Skinner with his (Patrick's) bankruptcy trustee, whereupon Patrick carefully did not disclose that he does not, in fact, even have a trustee [error in transcript, should read judge asking, "So, then you had to get permission from your trustee."]: 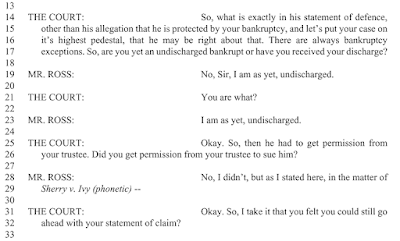 Note well what Patrick does above; rather than admit that he has no trustee (and has not had one for well over eight years), Patrick simply says no, in what can only be described as a massively unethical attempt to mislead the court. Now, it's not clear if one can accuse Patrick of outright lying here; on the other hand, if you're under oath, part of that oath is to tell the "whole" truth, and not disclosing that relevant bit of information certainly suggests that Patrick is riding the ragged edge of perjury here. But it get worse. So much worse.

At this point, as you can read above, it's obvious that the judge is under the mistaken impression that Patrick has a trustee, but simply chose not to consult him. But that's not even the worst of it.

If you scan up just a few lines, you can see where the judge asks Patrick whether he is still an undischarged bankrupt, or whether he has received his discharge, and Patrick stunningly answers:

"I am as yet, undischarged."

That is a mind-numbingly misleading answer, and here's why.

At this point, given that the judge obviously believes Patrick still has a trustee, it would be only natural for the judge to further assume that Patrick is working his way normally through his bankruptcy; that is, that Patrick probably has a Conditional Discharge Order (CDO) requiring monthly payments for a certain period, and that he is obediently paying it off, and honouring his obligations under the bankruptcy regime, and making his mandatory annual financial reports to the federal Office of the Superintendent of Bankruptcy (OSB) and properly and fully disclosing his assets and so on. In short, the judge -- now mistakenly believing that Patrick has a trustee -- would naturally assume that Patrick is a bankrupt in good standing and is moving through bankruptcy as normal and following the rules and so on, Patrick having claimed that he is "as yet" undischarged as if it is just a matter of time before that happens.

Nothing could be further from reality, of course. Because Patrick Ross, rather than being an undischarged bankrupt with a trustee and in good standing regarding his reporting and payment obligations with respect to his CDO, is -- as I have reported on numerous occasions -- many years behind on all of his OSB obligations, to the extent that, rather than being a bankrupt in good standing, Patrick is not even protected by bankruptcy's stay of proceedings anymore and, again as I have described previously, I have a provincial collections order against him and am currently garnishing his wages from his Alberta employer.

You do not see the judge being aware of any of that, do you? And here's why that's critically important.

Because even apparently believing that Patrick Ross is a bankrupt in good standing, the judge kicked Patrick's imbecilic motion to the curb without even requiring Peter Skinner to speak. Even believing Patrick was following the rules of bankruptcy, the judge trashed his astonishingly ill-conceived motion. All of which leads one to wonder -- how would the judge have reacted if he had been made aware that:

The judge in this recent hearing crushed Patrick's motion, even believing Patrick was a bankrupt in good standing; one can only imagine the open-mouthed rage of His Honour if any of the above had come out during that hearing. And that is why Patrick is so totally and utterly screwed.

Because at the moment, Patrick is -- in what can only be described as a fit of absolute rage and desperation -- threatening to sue numerous people for what I have added up is a total of just under ten million dollars.

That's my back-of-the-napkin calculations as to what Patrick is demanding of various individuals for damage to his self-described unsullied and honourable public reputation. And here's why this transcript is so devastating for Patrick.

First, Patrick is absolutely convinced that he has jurisprudence that allows him to sue all and sundry without the permission (or even the existence) of his bankruptcy trustee. This transcript shows beyond any doubt that a judge disagrees, and has told Patrick so, which means that Patrick no longer has the excuse of ignorance. One of Patrick's shticks when he gets into court is to play the dumb, self-represented litigant, and express shock and dismay when the most basic fundamentals of law are explained to him, whereupon Patrick invariably whines, "Really? I had no idea, if only someone had told me, I didn't know that." Well, this transcript shows clearly that someone has told him, and that he now does know that. But that's not the worst part.

The worst part for Patrick is the inarguable proof that he is misleading the Court about his bankruptcy status, which brings me to my offer that, if anyone is currently on the receiving end of Patrick Ross' legal blustering and bloviating and harassment and legal actions, drop me a note at canadiancynic@yahoo.ca, and I will ship you a copy of the full transcript so you can eviscerate Patrick in court if that becomes necessary.

At this point, there is no question that Patrick Ross is now actively misleading the court, and now we have the evidence that can be presented to a judge to show that. Patrick has been fucking around this way for years, and now it's time for him to find out. And it's not going to be pretty.

P.S. Unsurprisingly, I exactly called what would happen with Patrick's moronic motion to strike almost a month ago, when I blogged: 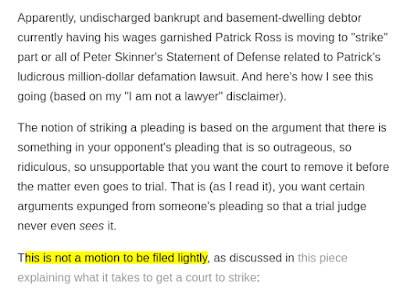 And what did the judge say some two weeks later? Oh, look ...

It's astonishing how well I understand how the law works, and how little Patrick understands it. But I think you've figured that out by now.

JUST TO NAIL THAT COFFIN SHUT, I will present this delicious example of Patrick Ross deliberately concealing from the court that he has no trustee: 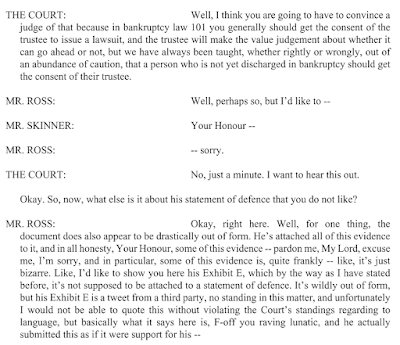 Note how, in that snippet, the judge goes on at length about the typical need for an undischarged bankrupt to ask his trustee for permission to file a legal action. The judge is actually being quite accommodating, making it clear that that is "generally" the way things are done out of an "abundance of caution" and so on, but clearly pushing the idea that the bankrupt's trustee really should be a part of the process. And that would have been the perfect time for Patrick to admit he had no trustee. Instead, despite all the hints and suggestions, Patrick continues to conceal that fact, and changes the subject.

I'm not sure how much more evidence one needs to submit that Patrick is deliberately misleading the court. But now that we have the transcript, it's safe to say that the next time Patrick tries this in open court, it will not end well. As the kids say, we have the receipts.

If Patrick thinks this can't get worse, he can guess again.

Couldn't anyone who he is trying to sue lawyer up, kick his ass and get their lawyer fees back via costs?

If so, Patrick could have many more battles to fight, should everyone else also ask for costs, as you previously had when you hired a lawyer to kick Patrick's ass.

Yes, it can get worse, but not only in the way you describe. There is a much worse consequence to Patrick's filing asinine and meritless legal actions, but I'm going to sit on that for a bit until the time is right.

At least the Grande Prairie judge came to the correct conclusion (Twatsy's motion fails). But was he in a rush or something? Shouldn't he have dug a little deeper into Twatrick's sordid legal and bankruptcy histories?

ROD: That would have been useful, but it's not clear that he had any information about that so he didn't address it.

How is it that the judge didn't know about Patrick's decade of non-compliance? And his lack of a trustee? And how much he owes you? And the sheriffs and the garnishment? Did Skinner not bring that up in his Statement of Defense? And if not, why not?

Anon @ 8:00 AM: I wondered that myself. Perhaps Peter did not include it in his SoD (which would be really weird). Or perhaps he did, and the judge simply did not read the entire SoD. But if you read that last exchange, you can see Peter trying to interrupt, and the judge stifling him to allow Patrick to continue. Perhaps that's what Peter was trying to get in edge-wise; if so, it would have been fascinating to see the effect on the hearing.

In any event, everyone now knows Patrick's tricks and will make sure the court is fully aware of his status.

I am sorry that you people have been dealing with Patrick's shit for over a decade now.
On the other hand the entertainment value for us in the cheap seats has been gold.

When Pat said he didn't have a trustee's permission to file the action, the judge had everything he needed to rule on the motion. Why waste time establishing the rest of Pat's sordid history? No sense in bludgeoning it to death when a quick cut will do.

The judge had one matter before them - the motion to strike Mr. Skinner’s SoD (or portions thereof).

The matter of Mr. Ross’ bankruptcy status is adjacent to, but perhaps not an obstacle per se to processing the motion.

From his comments, it’s clear the judge isn’t buying a substantial portion of what Mr. Ross is saying regarding his bankruptcy status, and were this at trial, it would be a much more important matter.

I'm not sure how it's possible for Patrick to fuck up his life any worse than this. I've known some self-destructive people in my time, but I've never seen anything even remotely like this.

Anon @ 1:28 PM: I can assure you, despite the current bleakness of Patrick Ross' pathetic dumpster fire of a life, it is about to get far, far worse.

Every time I feel bad about my own life, I can at least console myself in knowing that I am not Patrick Ross.