No, a court did NOT rule that the Freedom Convoy protest was "legal," and Keith Wilson QC is an asshat. 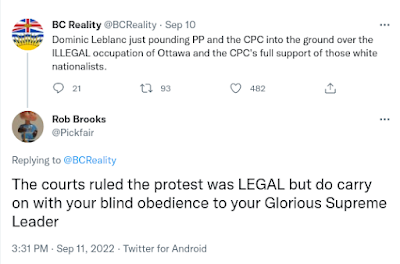 No, "the courts" said no such thing. I know, let's see what absolute asshat and man who knows nothing about the law (despite being a lawyer, apparently) Keith Wilson had to say about this: 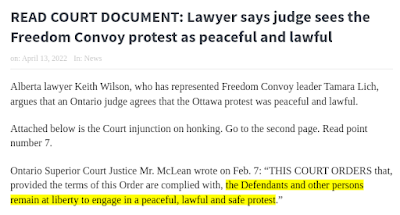 And now you can see why Keith Wilson QC is such an asshat since the judge in no way found the protest to be peaceful and lawful. Read that part of the ruling again ... slowly and carefully, unlike Keith Wilson, who is an illiterate asshat:

"... the Defendants and other persons remain at liberty to engage in a peaceful, lawful and safe protest.”

That's not the same thing, is it?

In fact, telling protesters that they can protest as long as they do it peacefully, lawfully and safely is perfectly reasonable, which is all the judge is saying here. He is saying nothing more as nothing more was a matter in front of him other than the horns.

So now you can appreciate what the judge was saying and not saying, or you can be a total asshat like Keith Wilson QC.

P.S. A more succinct explanation is that the judge could not possibly have ruled that the protest was peaceful or lawful since that was not the issue before the court; all the judge was being asked to rule on was the honking and nothing more.