I just received the full transcript of Lloydminster's Patrick Ross's tragically and hilariously asinine Motion to Strike against Peter Skinner (heard Aug 30 in Grande Prairie, AB), a hearing at which Patrick humiliated himself so monstrously that the judge did not even feel the need to call on Peter.
There's a good deal of entertainment value in that transcript, but I will excerpt the section where Patrick is asked directly by the judge about whether he had cleared his legal action with his trustee and ... oh, read it ... 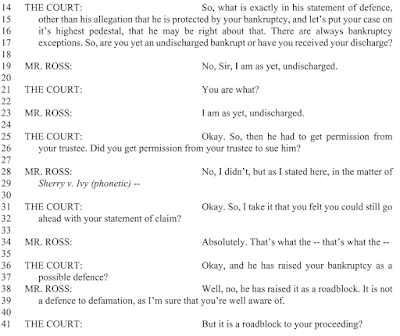 Understand something very clearly ... when asked whether he had run his lawsuit by his bankruptcy trustee, Patrick very carefully neglected to disclose that he does not have a trustee, and has not had one for over eight years.
It's hard to know if this constitutes lying to the court, but it certainly violates the spirit of telling (among other things) "the whole truth", given that Patrick so obviously side-stepped the judge's question and provided an answer clearly meant to mislead.
There's so much more crunchy goodness but, for now, I think we can all agree that Patrick Ross has now been informed, by an actual judge on the Court of Queen's Bench, that he has a problem with filing any more lawsuits.
Thanks for stopping by.
BONUS TRACK: Here's Patrick Ross, blar-har-har-ing about the judge supposedly telling Peter Skinner to put a sock in it: 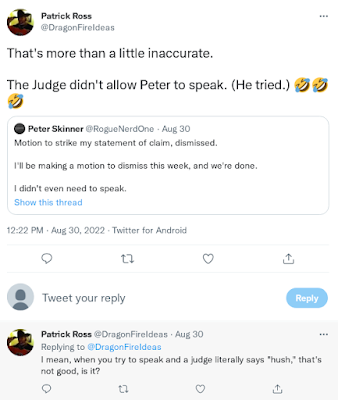 And this is from the transcript, where the judge made it clear he didn't even need to hear from Peter as he was dismissing the application:

Fuck, but Patrick is a weaselly little liar, isn't he?
Stop by tomorrow for more pants-peeing excerpts.
Posted by CC at 1:15 PM

Wow. All of Patrick's "reaching" on Twitter outright defeated with two pages of transcript. Ugh. Glad that's not me.

That is pure hilarity. I wish I could have seen the judge's face. I'm trying to deduce the expression from the careful, patient wording.

Oh, it gets better. To suggest that Patrick embarrasses himself does not begin to do justice to his cringeworthiness.

To everyone except Patrick, he seems to have embarrassed himself ... which says more about his own level of insight than anything else.

I'm more convinced than ever that he's providing legal advice to William Komer.