Keean Bexte is the Theo Fleury of Jamie Sales. 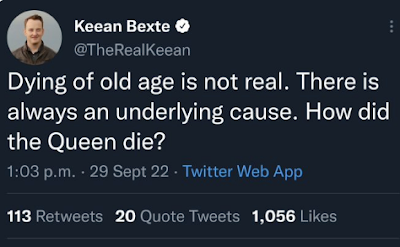 Somebody showed her Keeane Bexte's twitter feed and she realized there was no hope for humanity. She died of a broken heart, Keeane, and you're the one who caused it. I hope you're happy.

That pasty white incel is a ghoul.

When someone is 96 years old, "old age" is a perfectly good explanation for death. Exactly what bodily infirmity was the final cause doesn't matter. (and frankly, it can be a source of trauma for the family)

Donald Trump snuck into her hospital and smothered her with a pillow. I mean, you want a conspiracy, I'm game.

Who cares how the queen died? The important thing is that she did die and we finally have Camilla's tampon as our king. Bloody hell.

I think "old age" could mean the body shutting down until it stops, not due to a specific disease. A combination of body processes that wear out and stop working.

I think the Queen got quite bent over near the end, which also happened to my grandmother a month before she died at 91. On the other hand, her sister had a bent back for years before she died in her 70s.

@Anonymous 4:12 Yes, Charles . . . the man the establishment never forgave for being right about climate change and organic agriculture for years when it was still the fashion to be wrong about them, and that lots of ordinary people never forgave for apparently having a better sex life than them despite looking like a total nerd.
Those of us who need no jealousy on the sex life front, and who were also right about those things back in the day, view him with a bit more charity.

Yes, I suppose we should all be thankful that the new king wasn't banging Epstein's child sex slaves like his brother. And Chuck may favour sustainable investments, but like most plutocrats he still does his investing through shady offshore accounts to avoid paying his fair share of taxes. This, of course, contributes to social inequality, which is no surprise since the royals fully invested in that. Never figured you for a monarchist, PLG.

Have you heard of the wonderful one hoss shay?
It was built in such a logical way.
It ran 100 years to the day.

Kean's mental issues are a little more serious than his disturbing and quite visceral hatred of Trudeau. Of all the current and former Rebels, he actually appears to believe some very strange things about the world (as evidenced by this most recent post.) Some of his other hits:
- he suggested that COVID actually existed months before the first reported case, was contracted by members of the Canadian team at the Armed Forces Games in China, smuggled back into Canada, and concealed with the complicity of Trudeau and the DoD.
- a piece of plastic on the floor of his hotel room in Hong Kong was actually a secret espionage microchip dropped by agents conducting surveillance because of the danger to China posed by the Rebel's reporting.
- a beaver-chewed tree was in fact a "widowmaker" death trap set by protesters to kill RCMP agents at a protest site. (He knows because his unnamed, unseen "native" guide told him so.)
- It appears that a not for profit organization in a small office building on Queen St. in Toronto received a grant from the Tides foundation. It appears that Dominion Voting Machines once had an office in the same building. This, to Keean, was clear evidence of global collusion to bring down democracies around the world. (Shortly after publishing a string of articles on this "connection", Keean was released by the Rebel; the fact that Dominion had just announced their intention of suing fake news outlets for carrying such bullshit was probably just a coincidence.

I could go on, but you get the point. The Sheila Gunn Reids and Ezras will clearly say/write anything to keep dimwit blood boiling and dimwit cheques rolling in, but they're not dumb enough to believe the lies the post. Keean seems to swallow it all.

In Sherwin Nuland's "How We Die", probably the best book I've ever read on death, the author, a bioethicist and surgeon, spends much of one chapter noting that after a certain point, the only REAL "cause of death" that should be listed on the death certificate is "old age". He points out that things like pneumonia, heart failure and other common CODs are simply the very last point in the long list of failing systems that can no longer sustain life.

Anon @ 9:18 AM: I have, in fact, heard from more than one source that Bexte finally got the boot from Rebel, not only because he was a legal liability in terms of openly defaming people and organizations, but because, yes, he was considered simply too unhinged and mentally damaged to be trusted.

@Anonymous 8:02 AM Well, my theoretical ideal society wouldn't include a monarchy. But then, it wouldn't include capitalism either and its democracy would be a lot more direct and a lot less representative. In the current situation, IMO fighting the aristocracy is like fighting the last war--they already lost against the same people that are beating the rest of us, the capitalists. Charles is of course a rich capitalist, but that doesn't have much to do with his role as an aristocrat any more. And there are two specifics of monarchy in our current situation as a representative parliamentary democracy next to the US, that I like.

First, the US is currently on its way down, and one of the biggest Canadian political projects is not to go down the drain with them. Any differentiator we can scrape up to remind us we're not the same as them, such as we got a monarch and they don't, is good.

Second, the division between head of government and head of state, allowing for the concept of the loyal opposition. In the US we saw during George W.'s rule, increasing use of the idea that since the president was also the head of state and the commander in chief of the armed forces, opposing him was something like treason. Trump was too erratic to deploy that idea very consistently, but the Trumpian political movement definitely is into that kind of thing. Poilievre would probably love it too. But with a monarch, the official doctrine is that the parliamentary opposition to the government of the day is loyal to the CROWN, and through the crown to the country--it's their JOB to disagree with the Prime Minister, who is not the head of state but merely a governmental functionary also supposed to be loyal to the crown. In this, the existence of the crown fulfills an important symbolic function. You could have some other kind of symbolic head of state, but without the weight of tradition behind it, it would be less effective.

More about the woman in the photo Bexte is making fun of.

The quote is from here, not the one she linked:

Quite right about separation oh head of government and head of state, PLG. My own opinion is we should have followed the example of North Korea in the only sensible thing they did, and retained ERII (or ERI, as the case may be) as perpetual head of state.

Effectively that's what we have. Canada has abstracted the legal concept of "The Crown" to the point that it isn't actually a person per se - just a legal construct. With the exception of signing of legislation into force, we could designate a 1980 Mercury as "Monarch" and the legal apparatus of Canada continues to function just fine.

We can designate anyone we wish to sign legislation into force.

If this guy was any dumber he’d be Pierre Poilievre