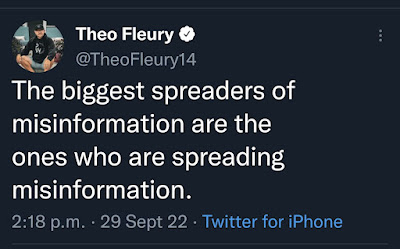 I'm guessing that this right-wing nugget does not understand that he's the one spreading.

This is why we wear our helmets...

He really is the stupidest of the Rebel associates, bar none. And that's not an easy call.

Introspection is not a strong suit with that one.

I appreciate Theo Fleury doing his part to prove that, despite years of being unfairly maligned, goaltenders are NOT the crazy ones on the team.
I've been a goalie for over 25 years and I'm nowhere near as crazy as Theo.

At least in the case of goaltenders, they would have a legit reason for being a little loopy. Standing in the way of a slice of vulcanized rubber being fired at you at high rates of speed several times a game - several more if you're on a really bad team - would make anyone a little stir-crazy. Especially in the old days, when masks were non-existent (or form-fitting with NO padding) and padding was nowhere near what it's like today. Seeing the chest protector alone makes one realise why spectacular glove hand saves and two-pad stacks were the rule of the day back then, and not taking the puck square in the logo.

Having said that, in Theo's defence, he - along with Sheldon Kennedy and a few others - endured things at the hands of Graham James that no one should ever have to, and all at a pretty vulnerable age. It not surprising that fucked them all up in various ways. It doesn't excuse Fleury for having trash opinions, but it might play a part in how he got where he is now.

I don't know if it's due to him still being pretty vulnerable (predators/bullies tend to go after those they deem easy targets) and Rebel and others have taken advantage of that. Maybe past events left him (understandably) having trust issues, but left him not being able to trust anything to such an extent that he's fallen down the conspiracy rabbit hole to explain things the "real news" won't tell you? Perhaps a combination of the two?

(I guess not being very bright in the first place could be a possibility, but I'm trying to be optimistic for some reason)

Therapy can help with certain things (he's apparently had some), but it's not an automatic cure-all. If anything, therapy will likely be a part of the rest of his life, and hopefully he has a good therapist. Having said THAT, I seem to recall a post by CC featuring a screenshot of a post by Theo regarding something that his therapist said that was...something that you wouldn't expect from one? At least a good one. I think it was about the Covid restrictions, but I sadly don't recall the post in question. Does anyone remember?

Anyway, long story short, I honestly feel a bit bad for the guy...but only to a point.