Regarding the recent motion at the Grande Prairie, Alberta courthouse, when Lloydminster's Patrick "Stud Monkey Super Mullet Kid Cash Assholery Nexus MMA Cosplay Quintuple Threat Bikini Designer" Ross unwisely tried to strike the entirety of Peter Skinner's Statement of Defense (he failed spectacularly), one of my confidential informants followed up with the courthouse to be told that the hearing lasted all of 19 minutes, the entirety of that time taken up with the judge lambasting Patrick for not understanding even the most basic concepts of law, explaining that his motion was idiotic, then feeding it into a woodchipper.

Said CI is now in the process of getting a copy of both the ruling and the transcript. Stay tuned.

AFTERSNARK: It is fascinating to see Patrick Ross weirdly claim victory after losing, but also to note that he is admittedly "paraphrasing": 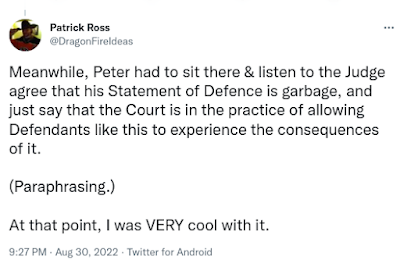 I say this is fascinating since I suspect that what we will learn once we see the transcript is precisely what I predicted two weeks ago:

The notion of striking a pleading is based on the argument that there is something in your opponent's pleading that is so outrageous, so ridiculous, so unsupportable that you want the court to remove it before the matter even goes to trial. That is (as I read it), you want certain arguments expunged from someone's pleading so that a trial judge never even sees it.

Note well the seriousness of what is required to strike; grounds for striking most definitely don't include alleged irrelevance, or your being upset about what someone claims, and so on. Again, to ask a court to strike someone's pleading is to suggest that what is submitted is so off the wall for some reason that a trial judge should not even be allowed to see it.

So I'm guessing that what is happening here is that boy lawyer Patrick Ross, once again digging into his "Civil Litigation for Asshats" colouring book, has latched onto this, then has (as always) mis-interpreted it beyond recognition and has written another hilariously meaningless and incoherent motion that will both stun and entertain the Court.

So despite what Patrick is bloviating about, what I predicted is that the judge would say little more than that Patrick has made no case for striking anything; we will see how accurate this prediction was once we all get a look at the transcript.

SPEAKING OF COSTS AWARD, a number of people asked if Peter Skinner would be entitled to costs. Well, almost certainly. Normally, after a ruling is issued (as it has been, wherein Patrick lost spectacularly), both parties have perhaps 10 days to make a costs submission, where naturally the winner should expect to be awarded costs. Even if you win outright, you rarely get awarded your full costs; more normally, you'll get partial indemnity, perhaps 60 per cent. But here's Patrick's problem.

If a judge is really pissed with you, maybe because your action was absolute garbage and clearly a waste of the court's time (as it seems like Patrick's was here), the judge has the leeway to really paste you with "enhanced" costs, just to teach you a lesson. And if that sounds familiar, well, that's what happened when Patrick filed a motion to oppose the Saskatchewan registration of my defamation judgment against him, and submitted such a steaming pile of irrelevant codswallop that, well ...

As you can see, the judge hearing that motion was so ticked off with Patrick's insufferable bullshit that she smacked him upside the head to the tune of $3,000 in costs. If Patrick's pleadings in this recent motion were similarly idiotic, he can expect a similar financial ass-kicking.

And it's not over yet. Stay tuned.

So if Peter is awarded costs, I guess we can assume Patrick will refuse to pay, and Patrick will owe Peter a bunch of money, so how will you two divvy up the spoils? Is there some sort of percentage split? Or how does that work?

I have no idea, but I'm fairly certain that Patrick will never be getting a decent credit rating any time this century.

Can Patrick drag this out and appeal this ruling?

Well, sure, you can always file an appeal, but that would be spectacularly stupid of Patrick for numerous reasons. (Which suggests he's probably going to do it.)

First, this entire motion was to simply strike parts of Peter's Statement of Defense, and had nothing to do with the fact of going to trial. In other words, even if Patrick had won, it would have had little to no effect on the eventual trial, so it seems pointless to continue to litigate something this insignificant.

Second, Patrick continuing to file application after application does little more than paint him as a vexatious litigant who should be barred from filing further actions without permission of the Court.

However, the biggest reason why Patrick would be stupid to appeal is that an appeal is supposed to focus specifically on alleged errors of fact or law in the original ruling; that is, you have to concentrate solely on the ruling you're appealing, and not wander all over the legal battlefield dragging in unrelated issues.

Patrick is simply incapable of doing this; rather than focus on what is essential, all of Patrick's submissions are nothing more than a grievance list as he whines pathetically about anything and everything going back over the last decade. Appeals judges have no patience with that sort of stupidity, so Patrick would not only lose the appeal, he would absolutely get hammered with significant costs for filing such an asinine and meritless appeal. But he can't help himself since he has no idea how the law works, and he keeps making the same mistakes over and over.

So, sure, he can appeal, and I can assure you that would end tragically badly for him.

Patrick _REALLY_ needs to consult with a lawyer.

I think we all know the outcome of said consultation, but it would save him, and a whole bunch of other people a lot of trouble.

While I realize that the courts often grant "benefit of the doubt" when hearing these matters, what Patrick is doing is treading dangerously into "Sovereign Citizen" territory in terms of tactics. It is now looking increasingly like his game is simply to throw delays in as long as possible, even when he (likely) knows full well there's little to no chance of the gambits being successful in court.

In other words, he's wasting the court's time, as well as the resources of his adversary - and in no respect can one say that the "greater good" of justice is being served.

Unless Patrick Ross hires a lawyer & soon, he is setting up his own financial ruin. It's hard to watch someone destroy themselves the way Patrick has. I am glad that it is not me; all I can really say at this point.

There is nothing a lawyer can do for Patrick at this point. I am not being facetious -- Patrick has left himself absolutely no way back from this. He is an undischarged bankrupt without a trustee, which means the *only* way out of bankruptcy is to pay off *all* his creditors, which means handing me $110,000 (increasing by the month).

He has no possibility of appeal for any of this (way past the deadline for any appeal), and his delusion of making a killing by suing others has just died a horrible death given his status as a bankrupt ruling out him being able to initiate legal actions (despite Patrick's deranged opinion to the contrary).

In any event, any lawyer would assuredly demand a whopping big retainer (I'm guessing $20-25,000, given how deeply Patrick has buried himself), and if Patrick somehow managed to come up with that cash, I would simply file to take it pursuant to my collection proceedings.

That boy is seriously screwed. And it's not over. If Patrick thinks it can't get any worse, I have some really bad news for him.

I think the best part is how Twatrick gloats about how badly he's going to beat someone in court, just before getting absolutely crushed. It never fails. I don't think he's won a single action, has he?

As Einstein once said, "Insanity is doing the same thing repeatedly and expecting different results". I'm not saying Twatsy is insane because he tries to lawyer cosplay and loses every single time, but draw your own conclusions.