And by "unpopular," we mean "indescribably fucking stupid." 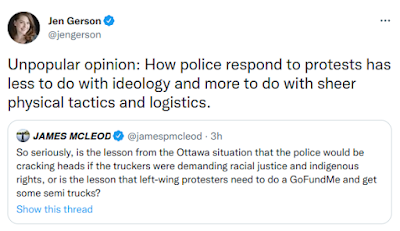 Yeah, that would be Jen "Doug Ford won't be so bad" Gerson. She's an idiot.

Jen Gerson is the Licia Corbella of Lorrie Goldsteins.

Jen just demonstrated how little she knows about people, protests and police. Dealing with the truckers doesn't need to be expensive or logistically complicated. It's about divide and conquer.

So you start arresting people for breaching the peace. That allows you to hold them while you check them out. And you start running license plates looking for suspensions, expired plates and licenses, and you haul those people in too. Then there's the bylaw and the criminal infractions. Pretty soon you've got a bunch of people looking at fines and jail time and others looking to get out of Dodge.

The hands off approach was arguably appropriate on the weekend, although Toronto and Kingston police were providing reinforcements so more could have been done. Continuing it on Monday showed the police in the tank with the protestors. They finally started enforcing the law today, and as expected, turned up a license infraction. https://globalnews.ca/news/8591904/trucker-protest-tickets-ottawa-police/

This is all basic policing. That it took until Thursday to get going shows an unacceptable lack of leadership. Asking for the army's help when you haven't even tried to enforce the law shows pure cowardice and dereliction of duty.

Nah, Anonymous, asking for the army's help was just another delay tactic so it wouldn't look quite so much like they were simply refusing to do their job.