Can we all remember this regarding CPC MP Mark Strahl and "Briane from Chilliwack?"

It would be one thing for CPC MP Mark Strahl to sheepishly admit that he publicized that obvious fiction because he had been told it had happened, and he stupidly never bothered to confirm it. But that is not what happened here -- Strahl openly claims to know who "Briane" is, and claims to have been working with her, and that is an entirely different situation. 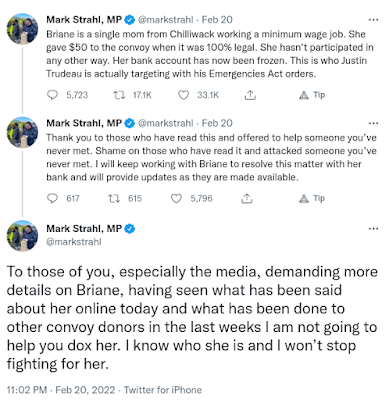 At this point, the appropriate question for Strahl would be, "Do you still claim to know who this Briane is?" You're not asking him to reveal anything, you're just asking Strahl to confirm that he is standing by his story, and that he knows the identity of this woman.

The whole point is to spread false information and gather pity. The poor extreme right and their supporters are hard done by the mean Trudeau...

Mark Strahl is encouraging sedition.
The Cons are such cute quislings.

Of course, the cheap stenographers have reported his dropping as fact, even if the RCMP have called out his bullshit.