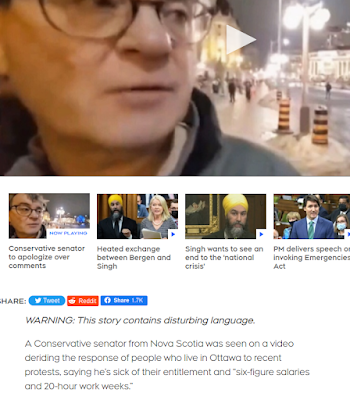 MacDonald then threw his tea at a server, screaming that it had not been heated to precisely 82.6C as he had ordered, and to take it back.

"It’s a cross-section of Canadians who have said we have had enough of the bullying, and the duplicity and the lies,”
-- Conservative Senator Michael MacDonald

He then goes on to lie - like all Conservatives it seems.
I wonder how productive this low-life is?

Blaming his remarks on alcohol...he only seems sorry he was caught.


When will conservatism be classified as the mental illness that it is?