Sure, let's talk about Chad Williamson and Rebel News again.

So, to recap, the Canadian government is currently going aggressively after both the people who actively participated in various illegal "trucker" blockades and occupations, as well as any obvious "influencers" and sources of income, which brings us to Rebel News, who should be right at the top of the list of entities that provided material and/or financial support for all that criminal behaviour by openly and gleefully promising to provide free legal representation to anyone who wanted to continue committing crimes of one sort or another: 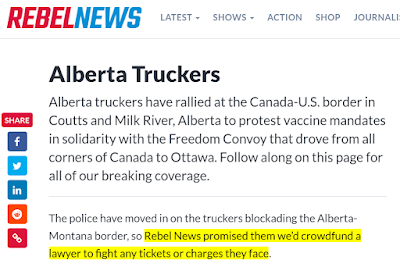 And given that Der Rebel has just as openly and gleefully advertised the services of Calgary lawyer Chad "Chad" Williamson, one would think that the authorities might want to have a conversation with Chad and, who knows, perhaps put a lock on all that cash until various ugly details are sorted out. Because if encouraging people to continue committing crimes by promising them free legal representation when they get caught doesn't represent offering financial support for ongoing criminal activity, well, it's not clear what does.

I'm sure Chad still has all the receipts.

P.S. It remains to be seen whether Der Rebel openly brags about all their upcoming legal victories regarding truckers and trucker supporters being charged criminally the way they did in breathlessly celebrating their trivial wins related to mask mandates: "SUCCESS! We had Mary Ann's $85 ticket for entering a Dollar Store without her mask overturned in court!!!"

Seems to me that the people being charged here are in a wee bit more trouble than Mary Ann, so it will be interesting to see Chad's choice of legal defences. Perhaps it will involve the First Amendment. One can only hope.

Okay, Drea Humphrey has just locked in her position as "Absolutely the Dumbest Person Ever to Appear Beneath the Rebel Masthead". And we all know just what an extraordinary feat THAT is, given the competition. https://twitter.com/DreaHumphrey/status/1496002831320559620?s=20&t=gdjOf5OxTBLLVQRkwsgwjg