If ever a face just screamed out to be pepper sprayed, ... 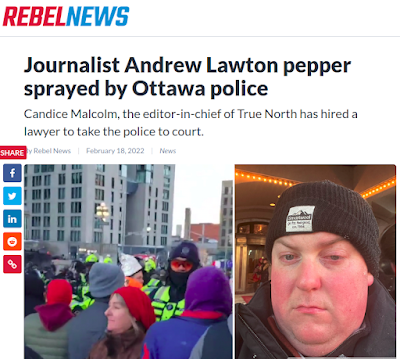 I smell another fundraiser.

I stopped reading when Conservative fart catcher Andrew Lawton was described as a "journalist".

Gack....that image of Lawton, I just vomited in my mouth.

Trying to pretend the effects of pepper spray are the same as being out in -20 degree weather for a bit.

Speaking of people in London who can get bent, how about this human lamprey, who was all too happy to take federal covid subsidies and then gave the truck nuts clownvoy $25,000?

Was he actually pepper-sprayed? Or are his eyes red from crying so much because the Fuckers Brigade's Hee Haw Hootenanny Hoedown is finally coming to an end?

I also love that they're looking to take the police to court, I'm assuming due to this. Good luck with that. I mean, all these assholes were warned about 5,643 times over several days(!) to leave the premises or get arrested, but I guess they thought that the coppers were on their side. Anyone with any level of intelligence knows that the cops aren't anyone's friend. The only people who think that's the case are (a) other cops or (b) absolute fucking morons! Given the fact the Fuckers Brigade was busy building a wall with light, fluffy snow to slow down the police from arresting them, in a city where snow is on the ground several months of the year...it's safe to say these aren't exactly intellectual heavyweights. Hell, they're barely intellectual flyweights.

At the same time, I guess I can understand why they thought the cops were on their side, given how they've been treated the past few weeks. Hell, the way they were warned repeatedly about clearing out or face arrest would make a lot of protesters go, "What a bunch of rank amateurs! I wish we got such warnings for our peaceful protests. We're usually 'warned' with tear gas, pepper spray, and/or rubber bullets".

That just made my day.