I did Nazi that coming: 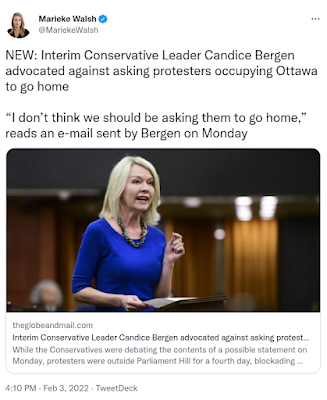 Well, yeah, I did. And so did you. Oh, and here's the best part -- Bergen is quite happy to let these hillbillies continue to occupy and terrorize Ottawa because (wait for it ... wait for it ...) she thinks it's advantageous politically:

So there you have it, Ottawa ... Candice Bergen would like you to fuck right off and continue to suffer, as long as she thinks she can milk your suffering for political gain. And if you think Bergen is a total c**t, well, just want until Skippy takes over.
Posted by CC at 4:25 AM

I've gotta ask, is Chief Sloly coordinating with the Cons? Because asking for the army's help is all about making this Trudeau's problem. Sloly surely knows that inadequate and ineffective policing in an Ontario city is ultimately Doug Ford's problem, so why isn't he asking him for help?

he should be asking the Premier's office and the OPP for help, but given that the premier is Doug Ford, I can understand why Chief Sloly would bypass that option. Dougie would probably send the OPP to burn down the House of Commons.
I'm all for calling out the military. When a foreign-funded group of terrorist occupy the national capital, that is absolutely a job for the armed forces, and I do mean "armed" -- you think your big rig is intimidating? Wait until it meets up with a actual tank. The 1st and 3rd battalions of the Royal Canadian Regiment are just sitting in Petawawa, let's see Justin do his impression of his dad's "just watch me" speech.
It may be just what the right wing wants, to turn these hillbillies into martyrs so they can perpetually fundraise from morons, but I promise you if the Army is sent in to round up these douchebags -by any means necessary - we won't have this problem again for a long time.