"Geez, so a few people are honking their horns, get over it, you snowflakes!"

One of the more amusing side-stories from the Freedom Convoy siege and occupation of Ottawa is the relentless downplaying of the horrific effects it's having on parts of the city, with various bloviating wankers hilariously misrepresenting the devastation it's inflicting on various neighbourhoods, and to prove that, I have the perfect example.

First, it is utterly unsurprising that Lloydminster's favourite homeless undischarged bankrupt and village idiot, Lord Baron Twatrick von Loadenhosen, delights in pooh-poohing the seriousness of it all: 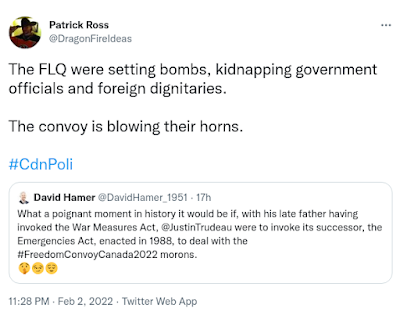 Ignore that those "horns" are big rig air horns that generate sound at a level that can permanently damage one's hearing, and that those horns were blaring for hours on end, day after day, well into the night. No big deal, it's just a few people blowing their horns.

And, of course, there is Rebel News' Ezra Levant, similarly mocking the severity of it all:

Sure, ignore the suffocating pall of diesel fumes choking residents of the city core, and the harassment of residents, and the assault of women wearing masks, and ... and ... and here's Rebel's Efron Monsanto, taking it to a whole new level by dismissing all the muss and fuss as outrage over "hot tubs and bouncy castles": 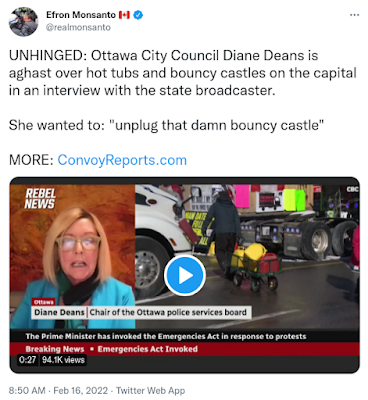 All of which inspires the obvious question: Do these yammering gasbags minimize shit when they're on the receiving end? Well, no, and do I have the most exquisite example for you, courtesy of the sleazy hypocrites at (where else?) Rebel News.

You see, it was just over five years ago that Rebel News went full-metal ballistic, outraged, hysterical over, well, this: 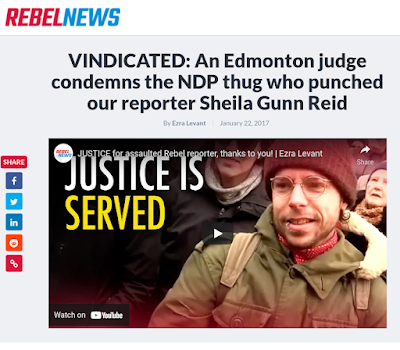 This deserves some explanation as, if you read Rebel News' breathless and wildly dishonest coverage of that incident, you would think that one Dion Bews brutally punched Rebel's in-house troll and paid liar Sheila Gunn Reid in the face.

What happened was that, at a public protest, Rebel's Gunn Reid was being such an enormous asshat and harassing Mr. Bews that he finally (according to quite reliable reports) turned around and slapped Sheila's camera to the side. Granted, that was not cool, but that is apparently what happened, at which point Rebel's victimhood machine was cranked frantically to 11, and the hysteria started.

Quite simply, you could not get through the day without another hopelessly dishonest screed from either Sheila or Ezra, as a simple case of slapping Sheila's camera almost immediately morphed into an example of a brutal, savage, crippling attack by an unhinged, leftard, NDP-supporting, homicidal animal who so brutally and savagely assaulted Gunn Reid in broad daylight, breaking three of her arms and seven of her legs and fracturing 239 of her ribs, and fracturing her skull so hideously that she spent the next four years in a coma, with doctors unsure she would survive, and finally wheeling her into a courtroom where she quietly testified against the brutal and savage leftard and NDP supporter who so brutally and savagely tried to murder her in cold blood on a cold Edmonton street, leaving her for dead and ... and ... well, I think you get the idea, this story having been blown so stunningly out of proportion that it generated well over a hundred screeching, victim-soaked and idiotic Rebel News articles: 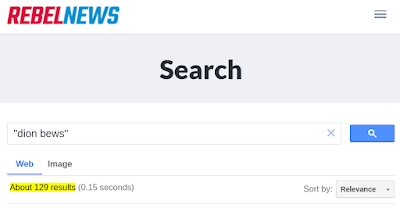 But, hey, the current siege and occupation of Ottawa is just some horn blowing, and a few hot tubs and bouncy castles, right?

Orwell once wrote an essay called “Notes on Nationalism”, but n which he states:

“ A nationalist is one who thinks solely, or mainly, in terms of competitive prestige. He may be a positive or a negative nationalist – that is, he may use his mental energy either in boosting or in denigrating – but at any rate his thoughts always turn on victories, defeats, triumphs and humiliations. He sees history, especially contemporary history, as the endless rise and decline of great power units, and every event that happens seems to him a demonstration that his own side is on the up-grade and some hated rival is on the down-grade. But finally, it is important not to confuse nationalism with mere worship of success. The nationalist does not go on the principle of simply ganging up with the strongest side. On the contrary, having picked his side, he persuades himself that it is the strongest, and is able to stick to his belief even when the facts are overwhelmingly against him. Nationalism is power hunger tempered by self-deception. Every nationalist is capable of the most flagrant dishonesty, but he is also – since he is conscious of serving something bigger than himself – unshakeably certain of being in the right.”