Welcome to the party, Bri-Bri.

Talentless propagandist Brian Lilley, who relentlessly defended the disruptive and crippling "Freedom Convoy" occupation of Ottawa since it started, suddenly develops an overwhelming empathy for "good people" whose jobs and lives are being ruined: 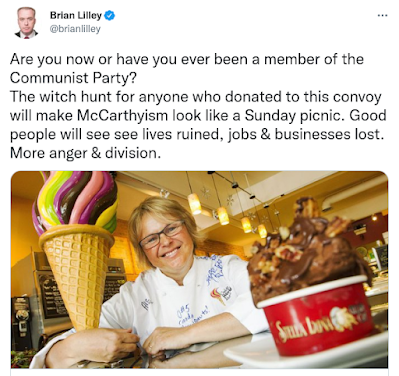 Anything to "own" Trudeau, right?

Lilley is, as you have pointed out, a right-wing propagandist.

Are you surprised he'd be defending the extreme-right who occupied Ottawa and wanted to overthrow the elected gov?


As for this being McCarthyism, well, that is just laughable. A poorly set up server that was hacked is very different from the Gov actively hunting "communists" and boogeymen.
Not that I expect Brian Lilley to understand that. He has fear and hate to propagate.

One wonders how much Lilley donated to the cause

The "witch hunt" is going to be the financial/legal equivalent of a full rectal exam for the CPC and their affiliates, I expect.

There's a whole lot of crap going on with the political right that needs to be exposed for what it is.