Wherein LuLu is actually too shocked for snark. 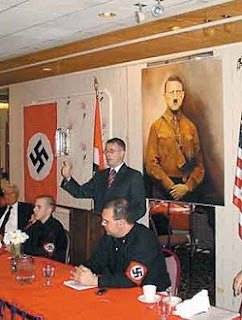 If fans of Hitler held a party, and a candidate for federal office attended, would anybody notice?

U.S. Congressional candidate Tony Zirkle is facing criticism from one of his primary opponents, and a host of people on the Internet, for speaking at an event over the weekend that celebrated Adolf Hitler's birthday. Zirkle confirmed to The News-Dispatch on Monday he spoke Sunday in Chicago at a meeting of the Nationalist Socialist Workers Party, whose symbol is a swastika.

When asked if he was a Nazi or sympathized with Nazis or white supremacists, Zirkle replied he didn't know enough about the group to either favor it or oppose it. "This is just a great opportunity for me to witness," he said, referring to his message and his Christian belief.

I’m not sure you want to describe your speech to a group of Neo-Nazis masquerading as white activists (Is there a difference? I can’t see a difference) as a “great opportunity”. But worry not, kids, Zirkle had good reason for making with the crazy.

The Crown Point Republican spoke in front of about 56 "white activists" at an event honoring the birth of Hitler. The German leader was responsible for the genocide of millions of Jews and others during World War II.

Zirkle said the group asked him to speak to discuss the effect of pornography and prostitution on young, white women and girls.

I guess all those young, non-white women and girls can just fuck off. Of course, he might've just been there for the cake.

At the event, Hitler's birthday was observed with a cake with a photo of Hitler and the words "Seig Heil."

Awwwwwwww — isn’t that sweet? Seriously, these people aren’t even trying to hide the fact that they're crazier than the average shithouse rat anymore.

What to you really need to know in order to oppose or support a group that celebrates the birthday of Hitler.

What critical piece of information are you missing?

Hey, I thought that was a picture of one of the early Reform Party meetings that got uncovered accidentaly in the EC search!

Seriously, there is dumb, but how fucking naive and sheltered would you have to be to not know what the Nazis stand for? Of all the stupid excuses I have heard, that is up there. Makes him perfect for congress, I suppose.

Oh he knows. He's been quoted as advocating segregated states in the US, but not the old 'failed' segregation, but as in 6 states for the black people so they can have 12 senators instead of half a one. and when called on it, stood by it.

He's just another of their jackals in lambskin, or seriously seriously off his meds, or both, but he's also a former state prosecutor so he knows...he knows.

in bed with nazis?! talk about yer "wide stance"!

Zirkle replied he didn't know enough about the group to either favor it or oppose it.

Nah, of course he doesn't. He was only there because patronizes the same barber as the birthday boy in the portrait.

Of course, his actual direct quote to the press might have been along the lines of, "I know nuzzing. I zee nuzzing. I hear nuzzing".