Some days, there is just no appropriate comeback: 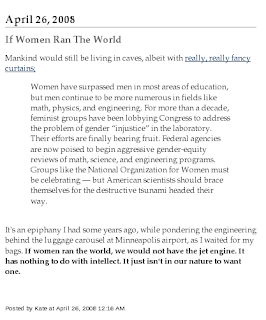 Kate McMillan: The Newt Gingrich of the prairies.

Yes we do. We just want them in pink, though.

She has really teensy epiphanies, doesn't she. I wonder if she can have multiple ones.

I'm still in tears over Newt, but it is true that I don't feel biologically driven to go out hunting giraffes.

It's an epiphany I had some years ago, while pondering the engineering behind the luggage carousel at Minneapolis airport, as I waited for my bags.

She either does a lot of drugs, or she's psychotic. Who has epiphanies waiting for their luggage at a carousel? I'm usually busy chatting with the people I'm traveling with. Oh, wait; that would explain things a bit...

If women ran the world, we would not have the jet engine. It has nothing to do with intellect. It just isn't in our nature to want one.

And yet it's in their nature to want a computer, and trucks and guns and air-brushing equipment?

What a load. If she ever bothered to tell us what she thinks is in "woman's nature," I think we'd start getting a few clues as to what motivates this moron.

uhm...was this the same woman seen posing with a crotch rocket between her legs?

She's a Quisling to her DoubleX. She has to get off on degrading her own sex, that's all I can figure out.

Why else would a woman state such baldly asinine misogyny? She needs a punitive verbal beat down by every woman in aerospace industries, let alone women in aeroplanes from day one of powered flight.

Why else would a woman state such baldly asinine misogyny?

a) to get more visits and the ad-sense revenue

b) to encourage direct donation revenue from some manly man who falls for the damsel in distress routine.

Follow the money and you will have no problem understanding everything Catherine says and does.