And the parade of the retarded continues. 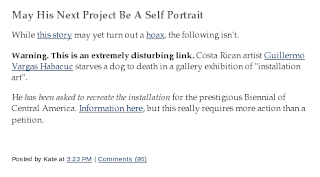 And then there's reality:

However, it didn't take too long to discover the exhibition was apparently a hoax, the purpose to expose people as "hyprocritical sheep" who are only concerned about a starving dog when it becomes the centre of attention when in a gallery. Ah.

The director of Códice Gallery which hosted the exhibition has defended Vargas' "conceptual art, a work that leaves a social message" and went on to say that the dog had not been mistreated, it ate and drank regularly, and finally was allowed to escape back to the streets from where it was taken at the end of the exhibition*.

Join us next week when Little Suzie Douchebag, miffed at being upstaged by Kate's recent airheadedness, vows to believe something even stupider.

Now, now...Kate only believed that because it was an event controlled by what she must imagine is someone of a beige persuasion...which is ironic, because a lot of Costa Ricans are probably whiter than that proud mulata/métisse from Delisle.

funnt that they'll call open season on whales and polar bears and spotted owls, but well fed feral dogs bring them to apoplexy....

"SWINE!! That SOB should be shot!"

This was a hot story for about 24 hours a few months ago. It was debunked almost immediately. You gotta take a second look when something is just plain fishy, like the kid who found a mistake in NASA's data (not so) and the artist who gave herself abortions (the fiction of it was the project).

Anyone writing for the web should be able to catch this one in no time.

"The thing is, humans are essentially good beings. We do need things to be highlighted for us sometimes."

and if that dog's name had been brenda martin?

Hi there
There is a new poll on this subject that shows there’s a huge split in public opinion. Some people think the artist had a point, some people would just like to see him dead! The results and article are here: http://www.thepetextraordinarium.co.uk/page.asp?id=52