BAGHDAD (Reuters) - Hunger and disease are spreading in Iraq as violence masks a deepening humanitarian crisis, British charity Oxfam said in a report on Monday.

"The terrible violence in Iraq has masked the ongoing humanitarian crisis. Malnutrition amongst children has dramatically increased and basic services, ruined by years of war and sanctions, cannot meet the needs of the Iraqi people," Oxfam director Jeremy Hobbs said...

Two million Iraqis have been forced to flee the country since 2003, and at least as many have been displaced within Iraq.

Not to worry, though, because all of that poverty, disease, homelessness and misery is apparently counterbalanced by: 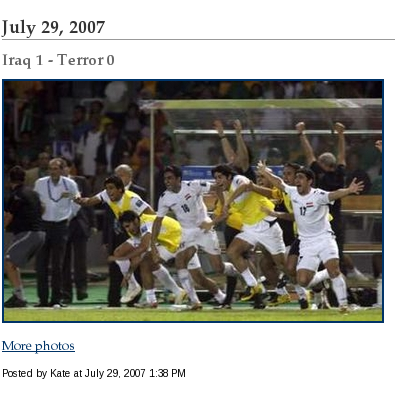 OK, moment's over, now we can go back to killing them. But it was fun while it lasted, wasn't it?

P.S. I wish I could have seen "Terror"'s team uniforms. I'll bet they were really cool.

P.P.S. If you have the stomach for it, read the comments at that article of Kate's. Really, just posting excerpts wouldn't begin to do justice to the mind-numbing, batshit craziness of Kate's adoring howler monkeys. It must be read to not be believed.

Iraq captain says he fears for his life, calls for US to leave country

Mahmoud scored the winning goal in Iraq's 1-0 Asian Cup final win over Saudi Arabia on Sunday, yet he feared for his life if he went home to celebrate the stunning victory, and said he would not be returning to the war-torn country.

"I don't want the Iraqi people to be angry with me," he said. But, "If I go back with the team, anybody could kill me or try to hurt me.

"One of my closest friends, they (the authorities) came to arrest him, and for one year neither me nor his family knew where he is."

The Sunni Muslim Iraqi captain — who like the rest of the team wore a black arm band to remember the dozens killed by carbombers following the side's semifinal victory over South Korea on Wednesday — said the American presence in his homeland was a "problem."

"I want America to go out," he said. "Today, tomorrow, or the day after tomorrow, but out. I wish the American people didn't invade Iraq and hopefully it will be over soon." ...

The team's players do not live in Iraq and work for clubs across the Middle East — Mahmoud works for Qatar club Al Gharafa and was leading scorer in the domestic league last season.

It's amazing what you can learn when you take the time to actually, you know, read. And stuff.

I cheered for Saudis for exactly that reason, because I knew dumbass conservatives in across North America would take it as some kind of sign of progress in Iraq if they won. Thing are so bad in Iraq that the national soccer team can't even practice there, so don't try to tell me this means doodly-squat.

Actually, calling Saudi Arabia the Terror team isn't wholly inaccurate. They do bankroll a lot of Islamic fundamentalist terrorism, and there were more Saudis on the planes on 9/11 than say oh I don't know Iraqis...

Oh, wait, forgot. They're allies in the Eternal War Against Terrorism and Oceania. Hard to keep that stuff straight sometimes.

According to Kate and her SOS meter, I have a special place reserved in Hell,... If I'm going to hell, I truly fear for where she is headed.

You do live in Hell, Zorph. You just choose to call it "Toronto."

Country's in ruins. Kids are starving to death. People are blowing up shit all over the place. They're occupied by a foreign power.


But they can still play soccer. Isn't that just ducky.

When they introduced "Team Terror," the crowds went silent, and all you could hear was the wind whistling through the stadium.

And then, inexplicably, they were just "there," clad all in black like the Nazgul from the Lord of the Rings.

I've no idea how those peppy Iraqis beat them, but beat them they did!

God bless george w. bush, may he shave my balls with his tongue.