Apparently, "censorship" is in the eyes of the beholder.


Well, it appears that Blogging Tory Joanne (True Blue) knows how to deal with those gosh-darned dissenting opinions: 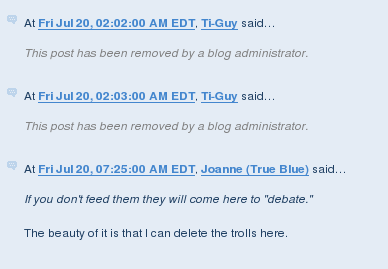 In other news, remember that I'm the one who can't handle criticism.

AFTERTHOUGHTS: Apparently, I misread commenter "rabbit," so let me clarify what I think of bloggy censorship. I do, in fact, believe that blog owners are capable of committing "censorship."

Of course, we all agree that a blog owner can do anything they want with their blog; that's not up for debate. What's up for debate is what is fair and acceptable behaviour.

If someone (as I do) starts to delete comments and ban commenters because they start acting like total dicks and filling my comments section with meaningless, off-topic crap, I think that's perfectly reasonable behaviour, and it in no way constitutes "censorship." You act like an asshole, I show you the door.

On the other hand, if you start deleting comments simply because you disagree with their content, that's where I draw the line in terms of acceptable behaviour. And it's particularly egregious when you publicly advertise that you have a public forum where any and all can have their say, then quietly start whacking out comments for no reason other than you can't handle the criticism; in my book, that's "censorship."

It doesn't matter if it's your blog. If you offer people a chance to comment on what you write, and they put in the time and effort to do that and respond to the issues, and you then throw it away, that's censorship.

And that's my theory, which is mine.

I saw that and wanted to know what T-G wrote that would send Joanne into a deleting frenzy...
I'm quite confident that Ti-Guy wrote in a most articulate manner and didn't invoke any, shall we say, 'more colourful metaphors'...

If you don't feed them they will come here to "debate."

We fight them over there so we don't have to delete them over here.

Hey, it's worked for Dubya, right?

here's a great bit--I've posted to two separate blogs on Lemon's site showing his dishonesty on the CC/Watkin issue, and both posts were removed.
I specifically replied to this comment--
Interesting - Cynic only allows comments on his site from "site members".
He's a coward and embarrassment to his family.
And so are the other "site members"
pointing out the untruthfulness of that very statement.
And yet, my comment was deleted.
Huge shock!

Clearly insane. I mean, what else is there to say?

Thought process of the people in question:

"I criticize people for doing stuff, except that they don't actually do what I'm accusing them of, and the icing on the cake is that I myself do all the time."

"Oh yeah, and the cherry on top of the icing is that I'm actually oblivious to my own delusions and hypocrisy."

This is not censorship. The owner of a blog has the complete right to control content, just as the publisher of a newspaper does. A blog owner is no more obliged to accept a comment than a newspaper is obliged to print a letter. Censorship occurs when the government or other authority dictates to blog owners how to conduct their business.

Anyway, Ti-Guy should probably quit using the "hard C" word except on those blogs where he knows it will be relished and appreciated.

"This is not censorship. The owner of a blog has the complete right to control content, just as the publisher of a newspaper does."

Then why am I accused of censorship when I (occasionally) choose to delete comments from people who have started to act like total pricks?

Come on, rabbit, you can't have it both ways.

People like Joanne are gutless hypocrites. When you attempt to debate her civilly she gets fed up with the "nit-picking" and tells you to bugger off, or just deletes your comments. Then she moans about the lack of civil discourse.

As was noted above, clearly insane.

I don't want it both ways - not that there's anything wrong with that.

Anybody that accuses you of censorship is wrong, and should get the same speech I just gave.

I saw that and wanted to know what T-G wrote that would send Joanne into a deleting frenzy...

I don't remember myself. I was just bugging her. I know I didn't use any vulgar language. I called one of her loony fans (PGP) by the nickname someone else gave him..."Creepy Sweater Guy."

Doesn't bother me in the least. I never read her blog. She's a douche and so are her regular commenters.

Of course not. It's only censorship when 'lefties' do it.

Just liker perjury and obstruction of justice is only wrong when Democrats do it.

Just like soliciting sex from a minor is wrong only when Democrats do it.

Just like having adulterous sex with a prostitute is only wrong when a Democrat does it.

If some people should stop using words, as rabbit is wont to do, then me thinks that BT's and the like should stop using the word 'troll' until they know what a 'troll' is (in blogging context).
Clearly, someone writing their own blogs, as well as *not* replying to related and/or linked blogs of others, cannot be a troll.

Is it just me who misundertood what "rabbit" said, or everyone else?

To be fair to rabbit, s/he is being honest and was quite fair about this both in this thread and over at Zorph's place earlier today.

I know I have had many differences of opinion with rabbit, and that s/he often sides with the wingnut side. But this time rabbit is being sensible, for a few minutes anyway.

So while its nice to slime the nutters for their hypocrisy, don't mistake rabbit for one of those in this instance. In this instance it appears that rabbit is siding with CC's right to turn off comments and its not "censorship", just as it is with Joanne. And though rabbit did not like the way CC started this latest teapot tempest, s/he has said s/he appreciates CC.

Perhaps a different word needs to be used besides censorship? How about "openness" - Joanne is not "open" to any opinion that does not conform to hers. That's close minded. CC is open to any opinion, whether he agrees or not, so long as they don't act like total pricks.

Its right to accuse nuts like Joanne of being close minded, echo-chamber confirmation-bias swilling fools, but they are not censoring anyone. And neither is CC.

I have found Rabbit to be polite and on topic he/she seems to stay on topic and understanding debating. It is too bad Rabbit doesn't run a blog, it would most likely be a good read.