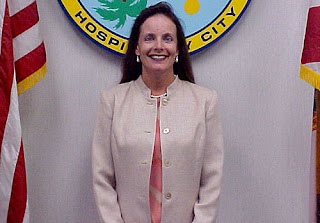 All Spin Zone points to a heart warming story of faith and family values. Edgewater, Florida councilwoman Debra Jean Rogers and her husband decided to exorcise their 18 year old daughter for the sin of swearing. In the process they managed to bruise the young woman and tear her clothing as they struggled to anoint her with olive oil.

The incident occurred after the woman's father, Daniel Rogers had threatened to shoot one of his daughter's friends when the daughter, Danielle, swore at her twin sister. This breach of parental authority inspired Mr. Rogers to call for the oil, which leads me, and the police, to suspect that this wasn't the first home exorcism to take place in that family. Police are considering bringing charges of battery and false imprisonment.

Well, while the police and attorneys are busy considering charges, I hope they don't forget to include uttering threats. Or is it legal to threaten to shoot people down in Jeb Bush's neck of the woods? What a sick bunch of freaks. I'm willing to believe that most religious folks aren't totally insane but reading this kind of thing just creeps me out. I hope Danielle Rogers gets all of the help and counseling she requires and cleans her crazy parents out in a civil case.

The Orlando Sentinel coverage includes a comments section that is split about half and half between people defending and condemning Rogers and her husband. Yup. Some folks think that assaulting your kids with oil and craziness is just fine. Bizarre. I wouldn't be at all surprised to see this unfold into a sordid tale of life long, serial child abuse. The lord works in mysterious ways, eh.

There's something very strange and compelling about this story. I decided to see what else was online. The Orlando Sentinel has a follow-up article. Seems the father routinely confronted his daughter about the contents of her diary and forced her to graphically confess the sins she committed on dates. Mrs. Rogers has accused the victim's advocate of being the devil's advocate (that would be the literal devil) and of conspiring with Danielle and punching her to falsify physical evidence. She has also claimed that investigating officers wanted to have sex with Danielle. In the follow-up article the comment thread is creepy and fascinating. One individual, using at least five names goes completely off the edge, ranting and raving about how developers and corrupt people are behind this. Sounds like Edgewater has one absolutely dramatic little saga on its hands. It's like a slow motion car wreck. I truly feel sorry for the kids involved in this and I hope that as crazy as the story is, that it doesn't take a turn for the tragic.
Posted by Lindsay Stewart at 9:03 PM

I wonder if the fundies will get as bent out of shape about this as they did about Susan Stanton?

This is really a creepy story. The father wanting to know exactly what the daughter is doing on dates is very, very creepy. *BLICK!*

I suspect there is a really sad an long story of abuse in this family.

The fundies aren't ALL batshit crazy, it's just a few bad apples, you know...

seriously rt, i believe what you say. but it's worth going through the comments of the second sentinel article to remind yourself just how true that is. just....wow.

Actually, it all sounds like just another Carl Hiaasen novel.