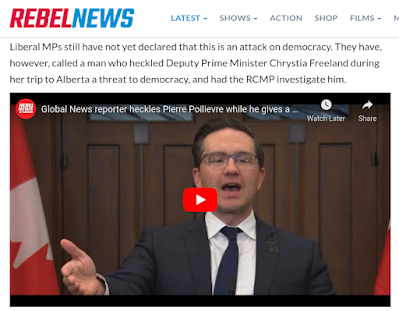 Because a large, unkempt, bearded man aggressively approaching Chrystia Freeland and swearing at her is just like an actual journalist insisting that Pierre Poilievre answer questions at his own press conference.
Gonna be a long and ugly three years.
P.S. If you haven't figured out that Poilievre is now working closely with Rebel News and operating straight out of their playbook, there's nothing I can do to help you. It's only a matter of time before Skippy begins referring demeaningly to the "Media Party." You read it here first.
BONUS TRACK: It is moderately amusing to watch Rebel News twist its nutsack in knots over the appalling lack of decorum from David Akin, given that Der Rebel's hacks absolutely specialize in ambush journalism and angry confrontation, to the point where one of its (ex-)hacks once chased climate activist Greta Thunberg down a hotel hallway: 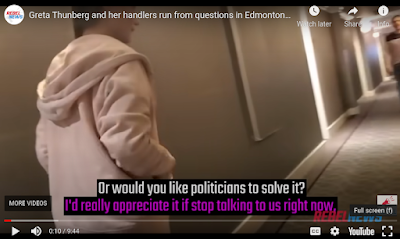 More to the point, one need only paw through old Rebel posts to see where its junior high school student reporters openly brag about how they "ambushed" someone, or "confronted" someone, or "surprised" someone. So when it comes to journalists pushing back against an evasive weasel like Pierre Poilievre, Ezra and his crew of hatchet job journos might want to sit this one out.
HERE'S A THOUGHT: Given the blatantly chummy relationship between Poilievre and Rebel News, perhaps some enterprising journo can ask Skippy something along the lines of, "Has your campaign purchased any product or service from Rebel News, or in any way engaged with them financially in exchange for favourable news coverage?"
After all, one is reminded of that time when Eva Braun^H^H^H^H^H^H^H^HKellie Leitch was exposed as to having shoveled tens of thousands in Rebel's direction at the same time she was getting gaggingly fawning and positive coverage from Ezra and his minions: 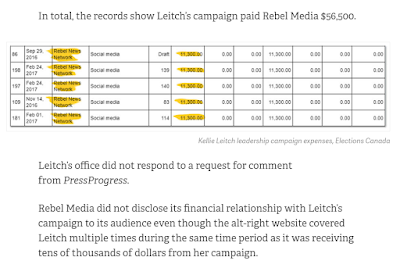 How about it, David Akin? Give it a shot. They don't like you, anyway. (Oh, and ask Skippy how his throbbing hard-on for cryptocurrency is working out. I dare you.)
I'M DYING HERE. 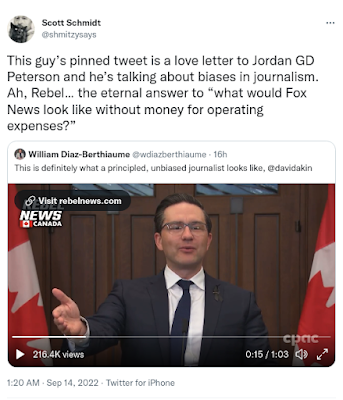 “Are you going to let me make my misstatement?”

What is going unsaid is that Akin was heckling Poilievre because he initially wasn't taking questions. He was agitating for the good of journalism and politics in general. Akin is generally middle-of-the-road, and he issued an apology on twitter today (which is kind of being a wuss on his part), but this is more Skippy taking a page from Harper's playbook with antagonizing the media. Rebel et al. is of course happy to do Poilievre's comms work for him.

Also, Ezra is lambasting Akin, but he used Akin as a fig leaf when he was trying to justify Sun News as a legitimate news source deserving of mandatory carriage.

It's actually quite encouraging.

Poilievre took a self-approved leave of absence for several months to run for the leadership of the Conservatives. His very skilful social media support team engineered a fantasy world in which he was portrayed as a political rockstar riding a huge surge of "popular support". That illusion depended on:
- relentless social media coverage of a series of meetings, shot rock concert style with quick cuts, dutch angles, handheld cameras and tons of motion.
- daily posts of a beaming Poilievre posing for selfie with a succession of visible minority families and supporter. It was interesting to compare the wide shots of his rallies (in which the crowd was overwhelmingly white) and the accompanying triptych of selfies from the same meetings, in which the supporters were overwhelmingly visible minorities.
- careful avoidance of ANY exposure to tough questions; no reporters at the rallies, no participation in the latter debates, nothing that would ruffle the carefully sculpted image.

All complete bullshit, and of course completely unsustainable. And after he was plucked from his carefully insulated campaign bubble, all it took was ONE scrum to shatter that illusion, and restore the old Poilievre - short tempered, combative, hostile, and with ONE line: "It's the LIBERALS."

For that reason I'm not worried about his candidacy. He is the most profoundly unlikable politician in Canada, and without the shelter of his handlers, the new and nicer PP persona is melting faster than a snowflake in Ottawa August.