"Sure, she hoovered up 10 million, walked off with a million of it, and the lawsuits are going to take the rest and every one of us is going to get boned up the ass but -- and hear me out -- let's give her another 16 million." 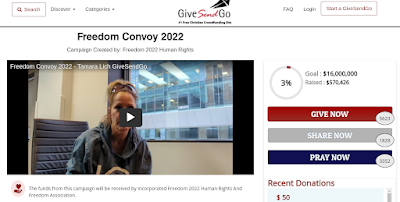 This is the level of stupid we're dealing with.

AFTERSNARK: This is Christian scam artists GiveSendGo, openly encouraging people to commit fraud by "disputing" their donation to GoFundMe, even though they openly admit that GoFundMe offers the opportunity to request a refund simply by clicking on a button.

Given the existence of the "Refund" button, not only will the above not work, but I'm guessing GiveSendGo can be sued by encouraging that sort of fraud. I don't think we've seen the last of the lawsuits here, but I think we can all agree that Tamara Lich can now afford a second McLaren F1.
A SERIOUS QUESTION: Even though GoFundMe is "officially" allowing donors to request a refund, it's not clear to me that GFM is even allowed to return money, given at least two lawsuits that are looking to seize those funds to compensate the city of Ottawa and its citizens for the nuisance and expense related to these ignorant, racist, Nazi, mouth-breathing hillbillies' ongoing siege of the city.
Can someone weigh in on the legalisms of whether these lawsuits have the power to absolutely freeze the remaining nine million in GFM's possession until these actions are resolved?
BY THE WAY, the entire right-wing grift-o-sphere (Rebel News included) are pissing blood in outrage over GFM's "seizure" of all this cash, but make sure you understand why. This is not simply about the money, oh, no ... it's because there is going to be accounting, and a Parliamentary committee, and people looking very closely into those obscenely massive anonymous donations to this GFM fundraiser, and questions will be asked, and money will be followed, and who knows if some of that is going to track back to, oh, hypothetically, Rebel News, or The Democracy Fund, or any of a number of entities with an obvious financial stake in all of this.
Let the forensics begin. And pass the popcorn.
Posted by CC at 5:17 AM

II’m no lawyer, but I would presume that the funds held by GoFundMe remain theirs to dispose of as they see fit until such times as there is a court order handed down freezing those funds. At this point, if I was the lawyer for one of these lawsuits, I would be filing an emergency motion with the courts asking that those funds be frozen pending the outcome of the lawsuit.

Since the lawsuit itself is going to run for years,it will create a headache for GoFundMe and the donors, but *shrugs*.

MgS: I agree entirely, which is why I am simply assuming that that sort of emergency injunction has already been incorporated into the action; it would seem to me a breathtaking oversight if it wasn't, but I am not a lawyer.

Could it be like the funds are received in trust like a house down payment to a lawyer?

The GSG people want you to dispute the charge, so it costs money for GFM to process that.

Hopefully GFM will be required to provide the bank/cc information for the donations to see how many unique people actually donated and compute their total donations. Apparently $25K split into a thousand separate donations is the recommended convoyer package. You get a free picture of Tammy in the new car

So why, exactly, do these people want to gratuitously cost GoFundMe money? So that GoFundMe will know to never, ever allow anyone from organizations like theirs to do a GoFundMe again?