Recognize any of this? 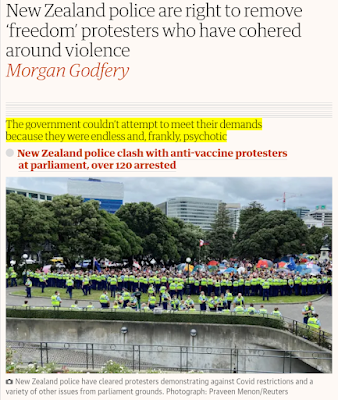 No, looks like police doing their jobs instead of taking selfies with Nazis.

An issue is that the Canadian Press are cheap stenographers looking for a story to amplify and sell.

I'm guessing, that in the case of the Canadian Trucker Tantrum, the headline "Extreme right-wing loons and Nazis who hate Trudeau want to blackmail the Federal Gov. with demands that are frankly psychotic" would not sell as much.

These "freedumb convoy" idiots want the government to resign. (They also either want to have sex with Trudeau or hang him. Or maybe they're like William Burroughs and they think it's the same thing?)

I'd say that the provincial government should have made mandatory lessons on the deadly reality of COVID-19 for all of its police services but I'm pretty sure that a lot of Ottawa cops are hopeless lunkheads.

Hopeless and/or useless, that's for sure. One after another in different cities and towns, the "police" have said, "We want to negotiate and have this come to a peaceful end. We fear that if we do anything else, things could escalate". Really? Really?!? REALLY?!?!? Why would they worry things would escalate? The Fuckers Brigade keep saying how loving and peaceful they are. Surely, nothing bad could happen with them. [/sarcasm] Man, imagine if law enforcement were like this with every other protest! It's been two weeks in Ottawa, what the fuck are they waiting for, an engraved invitation?

Quite frankly, I'm waiting for the moment that all the truckers who are actually working take matters into their own hands, and break out the crowbars, tire irons, and chains. Then the "police" might wake up...and beat up those truckers instead. *Sighs*

I get some people's frustration with the pandemic and all, but it's not like one can just call up Covid-19 and negotiate terms with it to end its own mandate of making people sick and potentially killing them.

"Hi, yes, I'd like to speak with Covid-19, please. Yes. Uh huh. What do you mean I can't...it doesn't speak. It doesn't have a mouth. Well, some people talk out of their own asses. Does it have an ass? No? Oh, I see, it's a virus, and it just does what it does, when it does, no matter what anyone says. Yes, that does seem to complicate things."

Though speaking of all that...these idiots go on and on about how it's just the flu, or not that serious. Given all the things some of these numpties have used to "cure" or "treat" themselves when they inevitably get Covid-19 (drinking deluded bleach, injesting ivermectin, gargling iodine, supposedly drinking urine, etc.), it makes me wonder what they've treated the actual flu with in the past. It might explain why they are the way they are.

You can bet if Muslims or BLM decided to blockade bridges, the cops and Ford would have had them cleared out in 10 minutes