Saved at the Internet Archive so you can visit without giving Rebel News any clicks, here's Rebel News oil patch screech harpy and troll looking for a better bridge to live under Sheila Gunn Reid, seemingly encouraging donors to play games with Canada Revenue Agency regulations related to registered charities and tax receipts:

As it turns out, I wrote a short piece on this puzzling promotion about a month ago, so go read that to get up to speed ... I'll wait.

Now, I am not a tax lawyer, but it seems just the teensiest bit questionable to be trying to do an end-run around black-and-white CRA law regarding who is and is not allowed to dispense charitable tax receipts by funneling donations through someone else's registered charity. And it seems even weirder to be bragging about promoting that sort of behaviour online that publicly.

If there are any actual lawyery types out there who have an opinion, the comments section is open.

BONUS TRACK: The fine folks at Rebel News seem to not be the slightest bit concerned about the somewhat odd way they're collecting donations and promising charitable tax receipts: 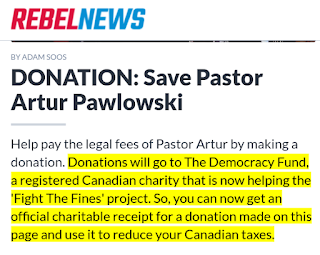 So, the way one reads this, you can donate to Rebel News' "Fight the Fines" campaign, but since Rebel News is not a registered charity under Canada Revenue Agency regulations, you would not be eligible for a tax receipt, but no worries as Rebel will simply turn that money over to "The Democracy Fund" (who is a registered charity and can issue tax receipts), at which time The Democracy Fund will ... well, I'm not sure ... simply give the money back to Rebel News to pay the lawyers?

I have no clue what the above means, but it just looks weird. If you want to weigh in, lines are open.

HMMMMMMMM ... An anonymous tipster directs me to this site related to Canadian charity law, specifically this little nugget:

Interestinger and interestinger ...
OOOOOOHHHHH, MYYYYYYYYYYY ... Another useful informant gifts me with the following from the site "bc centre for social enterprise," an article entitled "Five easy ways to jeopardize your charity," and check out the very first point:

Apparently, the CRA takes this sort of thing seriously:

I think the Rebel has decided that their future lies in serial litigation, where their fans donate tons of money to pursue/defend against dozens of lawsuits and charges, their circle of ambulance chasers rake off risk-free legal fees, and the Rebel banks the rest for its operations. While obviously sleazy in the extreme, I don't think that's illegal - the small print on the donation pages makes it pretty clear.

This tax dodge is more problematic, but I suspect the Rebel and the other parties to this little scheme will simply use any action by CRA as yet another opportunity for faux martyrdom, long term shrieky legal action, and of course, LOTS more fundraising.

Incidentally, there is a link on the CRA site for reporting suspected misuse of charitable status. https://www.canada.ca/en/revenue-agency/programs/about-canada-revenue-agency-cra/suspected-tax-cheating-in-canada-overview.html

It’s theoretically doable, although in the long run it turns Democracy Fund into a money laundering operation for the RW that just poses as a charitable org.

It’s crooked as hell, but probably skirts the line around being “just barely legal” ... and the grifters at The Rebel continue to fleece their followers as they always have.

The tangled and opaque clusterfuck that is Rebel funding is always fun to poke into - every little thread seems to lead to another.

Recently Sheila Gunn Reid provided a free plug to the "Resistance Coffee Roastery", whose website sells a range of coffee products branded with truly infantile taunts aimed at the left (Liberal Tears, COVID 1984, and other hilarious Rebel-isms). Their site promises to donate 10% of their sales to various right wing causes, including the Rebel's "Fight the Fines" grift, the Justice Centre for Constitutional Freedom, and so forth. Although their site is pretty cagey about location and ownership, Sheila lets slip that her gift came from Weyburn, Sask.
Curiously, there's ANOTHER small coffee roastery in Weyrburn, Saskatchewan. The Liberty Coffee Roasters, with product packaging and a range of coffees extraordinarily similar to those sold by "Resistance."
It can't be the same company, however, because "Liberty" prides itself upon its concern for its growers, employees, communities, and the environment, whereas "Resistance" prioritizes "standing up" for "property ownership". Wonderful that a small town can support two difference companies with such diametrically opposed philosophies, isn't it?