Rebel News to Aylmer Church of God: Sucks to be you.

While there is a longer piece coming regarding Rebel News' spectacularly lucrative "Fight the Fines" campaign, there is one observation I believe we can make right now -- that the gullible Christian leaders who are listening to Ezra Levant and taking him seriously are about to find out what happens when their value as fundraising fodder tanks.
Here's the current situation regarding the intellectual defectives running the Aylmer Church of God, who have brazenly flouted lockdown rules: 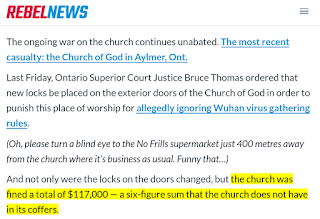 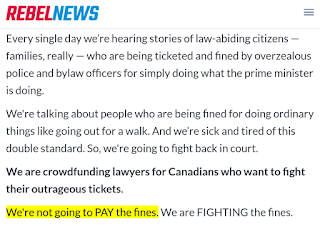 Oh, dear.
In other words, the idiots at Aylmer Church of God have saddled themselves with at least a $117,000 financial obligation, and Ezra and the rest of the braintrust at Der Rebel have made it abundantly clear that, regardless of how much dosh they've raked in, helping these morons cover fines is not part of the agreement. But it gets worse as I've been assured by moderately reliable people that the chance of beating those fines is next to zero, given the pastor's relentless, public bragging about it. You know ... this sort of dumbfuckery:

And one might ask, what the hell possessed someone to mouth off to the law and the court this way? What was it that encouraged those yobs to so blatantly defy the authorities and ... oh, there we go: 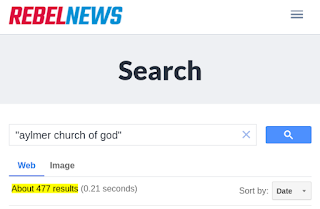 That would be Rebel News, who was smart enough to recognize the golden goose when they saw it, and apparently encouraged and goaded those people day after day into becoming money-generating martyrs, at least until the bill comes due, at which time, well, we already know how this is going to end:

Have I missed anything?
BY THE WAY, it actually gets worse. Not only is there little chance of beating those fines (given the pastor's really, really unwise mouthing off to the authorities), but if the church fights this in court and loses, they will very likely be saddled with significant costs, as a really, really stupid church in Waterloo learned recently: 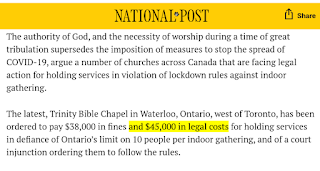 The moral of the story? "Sure, let's take legal advice from Ezra Levant ... what could possibly go wrong?"
Posted by CC at 6:27 AM

I myself would always turn for advice to a failed publisher who abandoned his standing as a lawyer just days before a scheduled hearing into questions about his professional conduct. Especially when backed up by an aging hack now posing as an expert in constitutional law, whose various theatrical challenges have been turfed out by the Supreme Court for years.

Geez anon, it sounds bad when you put it that way.

"Oh, please turn a bind eye to the No Frills supermarket just 400-metres away from the church where it's business as usual. Funny that..."

Funny, indeed! I'm sure David doesn't mean to suggest that it's business as usual at the Church of God (though given Pastor Hildebrandt's business model, it would certainly seem so).

No, I'm sure what David really means is that it's business as usual at No Frills. But is it? Has he not visited a grocery store these past fourteen months? Of course, it may be that they just don't let him in.